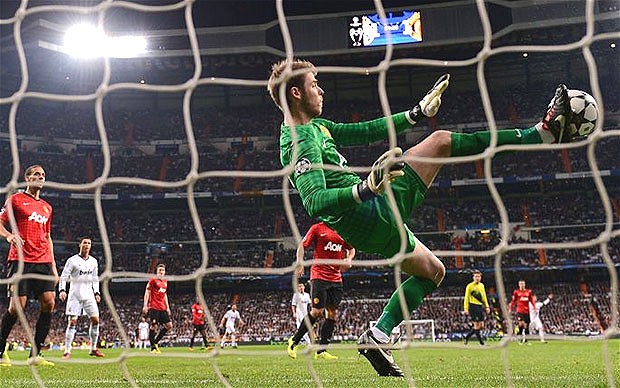 Sir Alex Ferguson has claimed that Manchester United goalkeeper David de Gea will gain a big confidence boost after his performance earlier this week against Real Madrid at the Santiago Bernabéu.

Since arriving in England, De Gea has been criticised over and over by the media. Daniel Taylor from The Guardian put it brilliantly last night, explaining it as “a brutally two-faced media when the people stampeding to bury him a few weeks ago are not trampling each other out of the way to lavish him with praise.”

After it was reported that Ferguson had given up on the 22-year-old, United were being linked with a number of goalkeepers. Eric Steele confirmed he doesn’t take any notice of the press and claimed “any criticism goes off that quiff.”

“Maturity helps,” said Ferguson. “There are very few goalkeepers who are the finished article at 20 years of age. There are some examples, like Gianluigi Buffon and Petr Cech. That’s not always the case. Peter Schmeichel didn’t join us until he was 27 and then gave us eight great years. Normally for goalkeepers it’s the mid-20s until you get the finished article. A good performance helps everyone. It gives them confidence, there’s no doubt about that. It won’t change him. He is a down-to-earth boy.”

With all the negative press he’s been getting in England, it was reported that he would be prepared to leave Manchester and return home to Spain. However, every day in Manchester he’s happier.

“I am very happy in Manchester. Every day I am happier,” De Gea told reporters after the game.

His performance in Madrid has been met with positivity. Among a handful or more of top class saves, two of his best prevented Coentrao from scoring.

“Stopping to Coentrao? That was just a very quick decision. I was acting on instinct,” he said. “It was a great match. Real Madrid and Manchester United did very well. [Madrid] have a very strong attack, so we needed to be strong in defence. Real Madrid will attack at Old Trafford. They know they have to win to advance and we will do our best to stop them.”