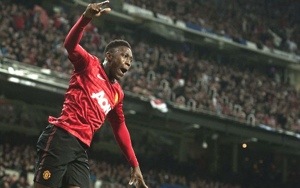 As we prepared to enter the colossal footballing amphitheatre that is the Santiago Bernabeu last night, there was bound to be a collective feeling of nervous anticipation and excitement.

Rewind a year, we were being ridiculed by media and fans alike with ‘Thursday night, channel 5’ chants as we made our Europa League bows after a disastrous Champions League group stage elimination from a group involving lesser teams Basel and Otelul Galati.

So to advance so convincingly in this season’s competition was thoroughly satisfying, but to draw one of the ultimate footballing heavyweights in Jose Mourinho’s Real Madrid is precisely the game that fans and players alike relish, as both manager’s went on record saying that the fixture ‘was the game the world wanted to see’.

Given all the various sub-plots and media publicity- the two footballing godfathers Real Madrid v Manchester United led by respective managerial godfathers in ‘The Special One’ and Sir Alex, you know who making his first appearance against the team where he found his ‘second home’, nostalgic sentiments were emanating not only as both set fans of fans waxed lyrical over Ronaldo in the build-up, but history itself only drew up gripping and inspiring memories- there have been some truly cherished and enthralling clashes from yester year. The pre-game build was spectacular, almost as if the game was the final itself, something Mourinho regretted was not the case. We were set for a night of captivating drama and nerve-shredding action.

Pre-match, the consensus in the Spanish and British media was that Madrid were this unassailable footballing juggernaut that would steamroll United, forgetting to take into account the stark reality that Madrid might as well put up the white flag when it comes to their La Liga ambitions- they trail bitter rivals Barcelona by a mammoth and surely insurmountable 16 points. Forgetting to take into account that we have a comfortable stranglehold on the Premier League, with a 12 point gap between us and the noisy neighbours, forgetting that we have a frontline capable of decimating any defence in the world.

Various media outlets you would have thought were conveying this match as Real Madrid against Halifax, we were the gross underdogs in their eyes- underdogs yes, but the extremities and hyperbolic nature of the media will never die. Which is probably why our superb collective effort to withstand recurring waves of attacks from Los Blancos turned a few heads to say the least. There were so many heroic and gutsy performances in red last night- Rafael defended manfully, likewise Jonny Evans, Rio Ferdinand yet again showed that age is no barrier, Phil Jones was assigned a gruelling and industrious role to counteract their main weapons, as illustrated in recent domestic fixtures when he was deployed in a man-marking role to nullify Gareth Bale and Marouane Fellaini.

But I would like this piece to be dedicated to two individuals who have copped their fair share of critics this campaign.

Firstly, big Dave in goal. On the eve of the match, the manager in typically bullish style vehemently defended the harshly under-fire keeper likening his progress at United to the first steps of a toddler- they wobble, fall down but eventually find their feet and start walking. Contextually, this game was of paramount importance not only on the field but also in the surroundings: this was De Gea’s first return to his hometown, having come to prominence for Real fiercest rivals Atletico before moving to Manchester in 2011. He was bound to be the villain of the piece in the eyes of the Madridistas so he not only had to counteract and overcome the vast attacking artillery mainly provided by Cristiano Ronaldo but also contend with the blood-thirsty crowd who had not forgotten his footballing heritage.

De Gea probably knew he would be stretched and tested to the limit in the Bernabeu, but he set the tone as early as the 5th minute with a crucial palm onto the post to deny Fabio Coentrao. If that goal had gone in, the fact it was early in the match meant the difficulty of trying to retrieve the match would have gone from a Kilimanjaro scale to an Everest, so to keep the score deadlocked at 0-0 was critical from our perspective.

Although he looked fallible from set-piece delivery, not for the first time in his United career, Real hardly severely tested him in this regard. They seldom pumped balls into the box, concentrating their efforts on getting shots away, something that is De Gea’s bread and butter- something that has never been questioned has been his shot-stopping which is of top quality. This allowed De Gea to have a more comfortable night, if that is possible, as he was confident in his abilities to propel their efforts.

Moving away from Dave momentarily, brings me onto the second player in question to have a blinder last night. It is virtually impossible to second-guess Sir Alex when it comes to team selection but surely only a few brave punters could have foreseen young Danny Welbeck in the starting XI.

Welbeck, who was subject to criticism from one journalist in the press at the weekend, has not featured a lot lately, but the manager has never shirked a gamble in his life and it was a bold and gutsy move to select the Longsight-born attacker in an unfavoured role on the wing ahead of Antonio Valencia, Nani and fit again Ashley Young.

Bold and gutsy typified Welbeck’s unselfish contribution to the cause last night too. Notwithstanding the fact that Welbeck’s goal return has not been adequate this season, (just one goal at club level before last night’s game, a header versus Stoke at Old Trafford in the league) the things you are virtually guaranteed from the local lad when he crosses the white line is whole-hearted commitment and an infectious work-ethic that rubs up on the other 10 players.

Welbeck has been made in Manchester, it was plain to see that this was the pinnacle of his fledgling career to date. Unfazed by the fact he was playing in a footballing coliseum, (last night’s attendance was around 85,000, whereas their attendance for the noisy neighbours game was around 67,000- the world watches when we play), unfazed by the fact he was pitting his wits against one-time team-mate Ronaldo (whose lockers were side by side when Welbeck made the graduation to first-team member), Welbeck gave his all to the cause for his boyhood club, his freshness and boundless energy wreaking havoc and giving the Real defence countless problems- he was chasing down seemingly hopeful passes and turning them into attacking situations, Welbeck is a manager’s dream in the fact he will go beyond the 100% mark over the course of the 90 minutes.

Welbeck was righting the wrongs and silenced a few critics by planting a header into the corner of the net to give us the lead on the night and the crucial away goal that could be significant heading to Old Trafford. Welbeck’s endeavours were well rewarded with that goal before running himself into the ground, suffering from cramp around the 70 minute mark and was subsequently replaced to a rapturous reception from our superb 10,000 travelling brigade.

Of course, Ronaldo was not to be denied his moment in the spotlight by typically defying the laws of gravity to bury a header past the outstretched De Gea, his affection for United kicked in with a refusal to celebrate and a hand wave almost apologetically to the bench.

But without the later heroics of our much talked about Spaniard, we might be talking today of going into the second leg with a deficit. De Gea, more instinctively than anything, sprawled across his line to deny the sliding Coentrao with his boot, and denied Mesut Ozil and more impressively Sami Khedira late on to ensure we hold a marginal advantage ahead of the second-leg some 3 weeks away.
Last night represented a great opportunity for any of our players to become the latest hero in this monumental fixture. De Gea and Welbeck seized their opportunities which hopefully will see an upturn in their United careers, some new fortune, the chance to write a new legacy. Welbeck has certainly given the manager a selection headache as the season draws to an end. Welbeck showed his importance to our club, encapsulated with his tireless running and rewarded with a goal that he must have been dreaming of.

Despite all the rumblings and murmurs surrounding Stoke’s Asmir Begovic, De Gea has the unconditional backing of the manager, the players and the fans- who reiterated their appreciation at full-time. De Gea is in the unfortunate position where his errors as part of the learning process will be amplified ten fold because it is the most unforgiving position on the pitch, any error particularly at the highest level will more often than not get punished. People forget the fact that he is of tender age for a goalkeeper, De Gea at 22 has his whole career ahead of him, as a rule of thumb keepers peak at 30, De Gea’s stock will continue to rise and has the potential to be the world’s best and Spain’s No.1 in the future.

As we took the time last week to remember the tragic circumstances of the Munich Air Disaster and the Busby Babes, who core was decimated, it was certainly fitting that there were so many heroic performances from the younger bunch that evoked the spirit that was ingrained into Busby’s talented group. Rafael, Jones, Evans, De Gea and Welbeck all shone last night in a gritty, determined and heavily spirited draw.

Last night was a compelling prelude to the second leg, which promises to be another stunning and memorable encounter. It will surely be another game that the ‘world wants to see’.