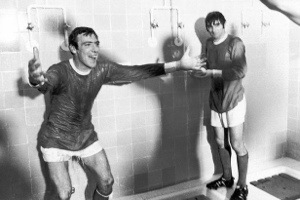 The day of reckoning is almost upon us. We are not hiding it from anyone, there is a lot of nervous energy and excited apprehension emanating from Manchester- fans, players and ex-players are absolutely buzzing to be involved in Europe’s top competition again (this time last year, we were making our bows in the Europa League, frankly an embarrassment and failure for a club of our stature, no disrespect to the Competition of course but we have been privileged over the years to have had some memorable nights in the Champions League).

The two fixtures against Real Madrid should prove to be no different. This is the kind of fixture that dreams are made of. United v Real, simply put, is a severe clash of the titans, two footballing juggernauts past and present. Besides the fact that it is a colossal fixture, a few interesting sub-plots emerge: of course, the game has been classed as ‘Cristiano’s game’, despite it being said for the umpteenth time, this game represents Cristiano Ronaldo’s first appearances against the club who made him the tour de force he has been for the past 5 years now. Even for Ronaldo, this game must have unprecedented significance from a personal perspective- it is such a rarity when the cameras are not gazed on Ronaldo, but the hype surrounding this game has been euphoric and unparalleled.

The game also brings together two like-minded managers, two winners, two special beings. Of course, it is Fergie against the ‘special one’. Mourinho, who had long been tipped to be Fergie’s successor, has recently stated that both will retire at the same time ‘Fergie in his 90s and him in his 70s’. Mind games maybe, an implicit message to David Gill that he won’t wait forever perhaps- but Mourinho pitting his wits against the Godfather is a match-up that inspires the mind and induces nostalgic feelings.

These are two footballing luminaries, the perfect epitome of such a monumental fixture.

Real v United has been a fixture that has whetted the appetite down the years, as this review of previous encounters illustrates:

1968 European Cup semi-final
First leg: April 24, 1968: Manchester United 1 Real Madrid 0
Second leg: May 15, 1968: Real Madrid 3 Manchester United 3
The great George Best struck a decisive blow in the first leg, just 10 years after the aforementioned Busby Babes were decimated by the Munich tragedy. The legendary United knack of coming back off the canvas against the odds was in evidence here, Madrid took a 3-0 lead on the night in the second leg before a miraculous comeback inspired by goals from Brian Kidd, David Sadler and Bill Foulkes meant United were going to Wembley. They famously beat a Benfica side containing the great Eusebio to defy the odds and win the Champions League with our new crop of young talent just years after Munich.

2000 Champions League quarter-final
First leg: April 4, 2000: Real Madrid 0 Manchester United 0
Second leg: April 19, 2000: Manchester United 2 Real Madrid 3
We played very well in the Bernabeu that night, containing the waves of attacks from their Galacticos but crucially we failed to secure an away goal. Real managed 3 away goals at Old Trafford, through a Roy Keane own goal, and two goals from Raul (one after a sublime, outrageous bit of artistry and trickery from Redondo to leave Henning Berg with egg on his face. David Beckham scored a stunning individual goal and a Paul Scholes penalty reduced the arrears but it was ultimately not enough.

2003 Champions League quarter-final
First leg: April 8, 2003: Real Madrid 3 Manchester United 1
Second leg: April 23, 2003: Manchester United 4 Real Madrid 3
We met Real at the same stage of the competition just 3 years later and suffered a major blow in the Bernabeu coming away with a 3-1 defeat, not disastrous as we’d bagged an away goal but attack had to be the order of the day in the return leg. We just played into their hands, but we had no other option. It was do or die. The home leg saw the original Ronaldo tear us apart and as such he earned a standing ovation from all inside Old Trafford- a rarity in the modern era. His hat-trick took all the wind out of our sails and punctured any hope we had of progressing in the tournament. There were rumblings that David Beckham would be leaving United after that unforgettable boot to the face, he only made Madrid sit up and strengthen their interest by scoring a sumptuous free-kick that was typically Beckham in it’s execution before he bundled in a consolation at the end. Let’s hope lightning does not strike twice though when it comes to a man with ‘RONALDO’ etched on his back.

This fixture is not one for the faint-hearted, when these two sides meet there is generally unadulterated, breathless action with the world’s collective gaze on these two footballing giants.

The fixture has brought some truly unforgettable and iconic moments in the past. That Beckham free-kick, Ronaldo’s Brazilian Genius, the ridiculous provided by Redondo, and who could forget the John O’Shea nutmeg on Luis Figo- truly brilliant theatre.

Whatever the outcome over the two legs, no doubt we will have been enriched as football supporters. Hopefully we will not see too much of the talent that a certain Ronaldo possesses but either way these two meetings is a chance to say ‘hello’ again, a chance to once again remember the pyrotechnics he delivered for us on a weekly basis, hopefully like the players have been saying- emotion will get too much for him.

This is the ultimate footballing fixture, fasten your seatbelts.

One response to “United vs Real – The Ultimate Fixture”