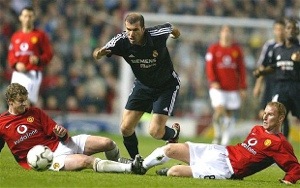 The two biggest clubs in the world, Real Madrid and Manchester United, lock horns in the last 16 of UEFA Champions league. There’s little I can say ahead of this anticipated tie that hasn’t already been said. The reinging Spanish champions versus the most successful English club, it’s the tie of the round. United are on an impressive run having beaten Everton on Sunday while a somewhat different Real Madrid team picked up three points against Sevilla.

Jose Mourinho has Madrid playing attacking football with some swift counter attacks. This season hasn’t exactly been the way they would have planned. Mourinho has lost control of the dressing room with rumours flying in about his bust up with the Spanish players, notably Sergio Ramos and the club captain, Iker Casillas. They are third in La Liga, 16 points behind the current league leaders Barcelona. In Europe, this season Real Madrid qualified 2nd in their group behind Borussia Dortmund and ahead of Ajax and Manchester City. They defeated Ajax and City at home but drew against Dortmund.

Manchester United are on a roll this season as SAF perfectly summed it up in the last night’s presser “The reality is that this team doesn’t know when it’s beaten, which is a great quality”. United have played quite an astonishing, attacking football and are the league leaders ahead of the defending champions, Manchester City. In Europe, United qualified 1st in their group ahead of Galatasaray, CFR Cluj and Braga.

To be within a chance of winning 2 tickets for the second leg at Old Trafford on March 5th, you will need to use either #HaveYourSayInMadrid or #HazteOirEnManchester when tweeting about the game. The winner will be selected at random and contact directly via Twitter (courtesy of bwin). Go to http://www.bwinfanchallenge.com to find out more about the competition and see the full terms and conditions.

Team News
Jose Mourinho confirmed that Pepe is fit to play. Xabi Alonso was a doubt but is expected to make it. Goalkeeper and club captain, Iker Casillas, is out of the tie with a broken arm so January signing Diego Lopez is expected to continue in the net. Sami Khedira and Mesut Ozil are expected to return after being rested in the last match.

Manchester United have little to worry on the injury front. Apart from Paul Scholes, who didn’t travel to Madrid due to knee injury, the entire squad is fit, as confirmed by the manager last night. Rio Ferdinand is expected to start today after being given a day off against Everton alongwith Michael Carrick who played for about 35 minutes due to an injury scare to Phil Jones.

-Real Madrid are 2nd on the goal scoring chart with an impressive 15 goals in the group phase behind Chelsea (16).

-Cristiano Ronaldo is this campaign’s top scorer with 6 goals.

-The Spainish giants have scored in their last 19 CL encounters. Barcelona were the last team to shut them out back in April 2011.

There is real belief about United right now working together as a team for each other. With club captain, Nemanja Vidic back after an injury, the defence looks solid and organized. My predictions are rarely accurate, so I won’t advice going and putting a bet on this but given the fact that we have played some amazing football and come away with a win against Manchester City and Chelsea(two of the toughest aways in PL) therefore I predict a 2-2 draw with Rooney to bag a brace.