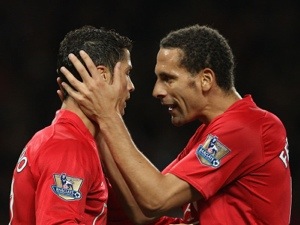 After a terrific performance against Everton at the weekend, Rafael da Silva is almost a definite starter in Madrid tomorrow night. He has sung the praises of his former team mate Cristiano Ronaldo, who he battled against regularly in training.

A lot of pundits have spoken out about how United will stop Ronaldo. Given his talent, I understand it to a certain point but Madrid have a list of excellent players that perform alongside Ronnie every week. We can try cancel Ronaldo out of the game but you cannot ignore the likes of Xabi Alonso, Di María, Benzema or Higuaín.

There will be lots of excitement in the stadium from fans and players who haven’t seen Ronaldo since he set off for Madrid in 2009. Even Rio Ferdinand had his say on the occasion.

“It’s obviously going to be an emotional night for Ronaldo and a great night for him too,” said Ferdinand. “But hopefully it gets too emotional for him. We’ve had a few texts, but when you get into a situation like this when you’re coming up against a friend, all the texts and the conversations go to one side and you don’t really speak until you actually get the game over and done with. He has a great rapport with the fans and there is a mutual respect between them both, which is great. The fans appreciated him when he was here and since he’s been gone they sing his name. He came here a young boy and left a world-class player. He showed a lot of respect when he left and still does. We’re going to have to use all of our experience, courage and ability to make sure that we stop not only Ronaldo, but the other players they have, because Real are a great team. They have so many other weapons. We could shut Ronaldo down for 90 minutes, but they still have players to hurt us, so we have to be compact and work hard.”

On the singing Ronaldo’s name front, it’s not something I do anymore especially if he’s playing against us. We have a squad of players that I’d prefer sing about and support, but that takes nothing away from Ronaldo. I still respect him for everything he did at the club.

One response to “Rafael and Ferdinand sing praises of Ronaldo”