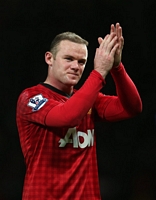 Wayne Rooney has pointed to City’s goalless draw at QPR to remind his United teammates they cannot become complacent in the title race. Complacency is what lost Manchester United the Premier League last season.

United have built a formidable nine-point lead over Roberto Mancini’s men but haven’t had the easiest of wins in recent weeks. Since drawing 1-1 away to Spurs, we have taken six points from six as well as progressing to the fifth round of the FA Cup.

Unsurprisingly, you have people questioning whether City will challenge like they did last season. Most observers are already thinking it will be United but you never know. It looks good at the minute, but we never do things the easy way. Rooney has no intention of falling into that trap and becoming complacent.

And with Everton coming to town on Sunday, Rooney will come up against his former club. After last season especially, we all know it won’t be an easy ride against David Moyes’ men.

“Results are the most important thing now,” Rooney said. “Look at Manchester City against QPR. They should have got the win, had a lot of chances but ended up dropping two points. That could quite easily have happened to us against Southampton the following night. It proves we have to keep picking up the points when we can. Once it comes down to the last four or five games, then we will see what position we are in and work out what we have to do.”

Since most people nowadays own smart phones, football statistic applications are in high demand. Rooney speaks about the system’s importance in the Manchester United dressing room.

“We don’t have anyone who doesn’t want to do the work,” he said. “We all look at the statistics after the game to see how much running we have done and are well aware of everything we do. There is no hiding place with all the technology and stuff.”

Given the amount of strikers we have at the club and the sheer quality they show on the pitch week-in week-out, it has left many puzzled as to why we are not killing teams off. Fulham last weekend is a great example. It took 79 minutes to open the scoring thanks to Rooney, after hitting the framework repeatedly.

“I can’t put my finger on why we are not killing teams off,” said Rooney. “We have scored plenty of goals. It is the most number we have scored at this stage of the season. We have conceded too many and have done throughout the season. But that is the way we have been set up to play. We have to just keep our scoring going.”