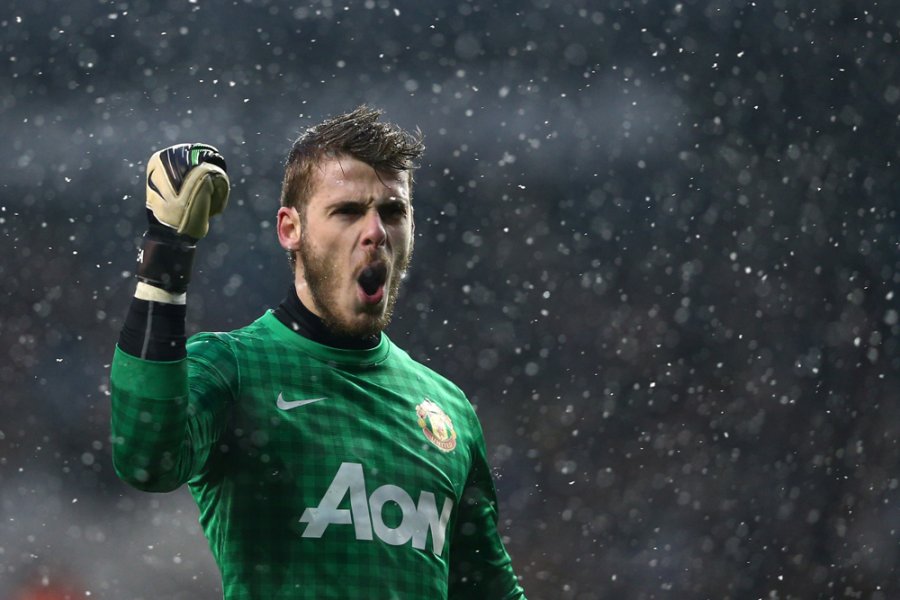 When the humungous and daunting presence for opposition strikers, Edwin Van Der Sar, decided to call time on a glorious and trophy-laden career, the biggest challenge of all would be to find a man who possessed similar qualities akin to the Dutchman. Van Der Sar was a calming influence on the back-four, someone who was comfortable with the ball at his feet, someone who would bail United out of some difficult situations, and over the course of the season, he could easily recoup 10 points that are normally critical when it’s time to dish out the silverware.

Given the aura and stature that Van Der Sar brought in his 5 years at United, it was never going to be an easy transition for the defence or for the man who was assigned the huge task of taking over the big Dutchman’s gloves.

Replacing such a colossal figure brings added pressures, let alone the fact the new man would be playing for the biggest club in the world. Until we finally signed Van Der Sar (something we tried upon Peter Schemeichel’s retirement when Van Der Sar was at Juventus), finding a suitable replacement was an unenviable task for even the greatest manager of all time. Sir Alex Ferguson entrusted his faith in Raimond Van Der Gouw, Mark Bosnich, Massimo Taibi (shudder), Fabien Barthez, Andy Goram, Roy Carroll and Tim Howard. None capitalised on their great opportunity.

Schmeichel and Van Der Sar could boast qualities of the highest order that were necessary to have a long and distinguished career at the top level. Both took charge and were in total command of their back four. Both were a considerable presence, they were both well-built and they must have made the goal look miniscule when in a one-on-one situation. They gave confidence to players and fans alike by dominating the penalty area and coming for crosses, taking anything and everything with them. Both were top quality distributors, enabling us to play out of the back or play measured long passes with accuracy. Their reflexes and shot-stopping ability were second to none, if these two goalkeepers had a good day, it was virtually guaranteed we would go on to win the match. Maybe understatedly, both were leaders in the dressing room- they were the voices dishing out encouragement or flack when needed, marshalling the troops when in battle.

That comparison highlights the enormity of the task that the 7 who tried and failed post-Schmeichel had on their plate. This brings me onto big Dave, our number 1 who has been the talk of the press (again).

When it became apparent that Edwin was calling it quits, plenty of names (as usual in the BBC gossip column and Talksport) were thrown around as to who would be the eventual successor- Rui Patricio, Pepe Reina, Marten Stekelenburg, Victor Valdes. However, the manager had already had it set in stone in his mind who his man was. This after he had delegated his brother to go and watch him keep a clean-sheet in the Nou Camp with a string of stunning saves to keep out Messi and Co.

When we announced the signing of David De Gea, on the eve of the under 21 championship he was about to star in, like most of our signings it was seen as a gamble (I mean, Robin Van Persie would not get double figures this season according to one journalist). Instead of focusing on his plus points, the media gang preferred to hone in on his potential weakness against the high ball, how he looked weak, the price tag, the language barrier. Matters were not helped when he was caught not paying for some doughnuts, the media had a field day with the typical puns you might expect. Welcome to England, Dave.

De Gea had a sticky start in United colours. At fault for Edin Dzeko and Shane Long goals in his first 2 games, not the ideal way to announce yourself to your new faithful. He was dropped after the New Year’s Eve shambles against Blackburn, when he failed to deal with a set-piece, enabling Grant Hanley to score a crucial winner in the circumstances, 3 points dropped.

That blunder evidently shook his confidence, something that De Gea needs to perform seemingly. It was at this point that Dave was taken out of the firing line, Anders Lindegaard taking his place and De Gea was put on a unique physical programme to try and beef him up, his lean presence was getting exposed. Ironically, he had his best game for United last season at Stoke, the place where the grass is immaculate as no football is played on it. The aerial bombardment was coped with relatively well by the Spaniard and he made some class saves to give us a hard-earned point at a notoriously difficult and volatile venue.

Being dropped for Lindegaard was a shot across the gills for Dave, a clear message that improvement was needed. He turned the corner with arguably the save of the season at Chelsea to repel a Juan Mata free-kick in the last minute that seemed destined to be the winner, if that had gone in after such a compelling comeback from 3-0 down, we maybe would not have had momentum for the final push. This upturn in form resulted in a more solid United backline and the foundations of a solid team always starts from the back.

At times this season, Dave has kept us in some games and gone onto secure us some valuable points. First up away at Everton, he kept the score down, we were poor and it was because of Dave that we came away with a rather flattering 1-0 defeat. Fulham came strong at Old Trafford next up and as we sat back in the second half, we invited Fulham pressure- De Gea ensured we got the win with some key stops, although a mix-up with Nemanja Vidic hardly helped his case, it almost sewed fresh seeds of doubt, the media were all over his case again like a cheap suit.

There are a couple of factors that have not helped the Spaniard’s case. This season and last, for a period it seemed the manager was content to rotate the goalkeepers. Lindegaard came in and was not particularly convincing, he did not do much outright to suggest he should take the gloves from De Gea. This rotation policy was not popular amongst fans and could hardly have instilled confidence into what was becoming a very leaky United defence, something atypical in the Ferguson era.

Secondly, there was a rather alarming statistic that in De Gea’s 60 appearances since his arrival, there has only been an unchanged defence 16 times. 16! Even the best in the trade (Van Der Sar, Schmeichel) would not find having to marshal new personnel on a weekly basis particularly straightforward.

De Gea’s shot-stopping capabilities have never been questioned, this is his forte- epitomised by a stunning late save in Romania against Cluj to ensure we held the lead and secured a good 2-1 away win. However, fresh question marks have emanated particularly in the tabloid press (as always) over De Gea. Martin Samuel said his ‘error’ against Liverpool in failing to hold Steven Gerrard’s shot planted fresh doubts about his long-term future! Unbelievable. It was actually a very good save, it was giving the ball away in midfield, allowing Gerrard room to shoot and Rafael’s daydreaming allowing Sturridge to score that were the contributing factors. I for one would have loved to have seen Samuel try and get down and save that shot. Maybe De Gea took the last lot of doughnuts from the shelf. Having kept us in the game at Tottenham last weekend, fingers were pointed at failing to deal with a cross allowing a last-minute equaliser, which has reduced our lead from 7 points to 5. The media were not stamping their feet earlier on in the season when Pepe Reina and Joe Hart were making mistakes. The sharks always circle around our club and seemingly only sniff for our blood, something the manager knows all too well, saying the criticism of De Gea is ‘unfounded’.

What is obvious, is the fact that De Gea is the man for Sir Alex. He is the master of player protection and would not hang De Gea out to dry. Maybe, behind closed doors, he would give him the rollicking or arm around the shoulder needed, but in his eyes he is our number 1 for years to come.

You do not become a bad goalkeeper overnight. Iker Casillas, who has set the benchmark for aspiring goalkeepers in terms of longevity and quality, is adamant that De Gea will take his spot as Spain’s eventual number 1 and will become the best goalkeeper in the world. Those who question the price tag, £20M will look a bargain if we get a decade or more out of the Spaniard, unless the media drive him out of the country with their constant drivel.

If he gets a gold medal around his neck in May, it will be a big middle finger to the witch-hunt which persists.

6 responses to “Why are the De Gea-ters still out in force?”