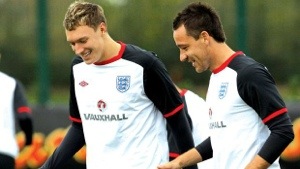 When Ferguson says Jones “has more in his locker” than Chelsea captain John Terry, he’s referring to football attributes on the pitch. In Terry’s case his locker is more than likely full of pictures featuring Wayne Bridge’s ex-missus.

The 20-year-old defender has had a season hampered by a back injury, but after returning for the Liverpool win earlier this month, he has started our last three games.

Since his move to Manchester from Blackburn Rovers in the summer of 2011, Jones has made five appearances for the national team. At U-21 level, he played just

The fledgling centre-back, who turns 21 next month, has made five appearances for the national team after impressing following his £16.5 million move to Manchester from Blackburn in the summer of 2011. Fergie is convinced of his talent, claiming he has more talent than John Terry did at his age, though he acknowledged the Chelsea captain’s wealth of experience as well.

“Jones has got more in his locker than John,” Ferguson said. “Terry has got the ­experience and has become a fantastic central figure at Chelsea. But as a young player, John would be the first to admit he didn’t have the pace of Phil Jones.”

Fergie went on to praise Jones’ versatility. Since signing for United he has played at right back, center back and defensive midfield. He played as defensive midfielder for England against Spain at Wembley last year.

One response to “Jones Has More In His Locker Than JT”