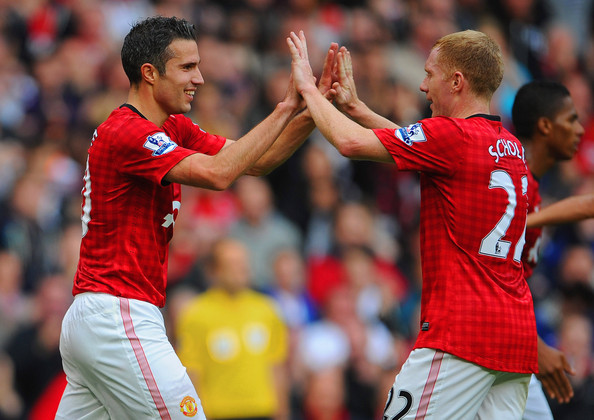 In terms of high profile transfers in the transfer window at the start of the season, there was only one winner. Mercurial Dutch striker Robin van Persie decided it was time to move away from north London with Manchester United, Manchester City and Juventus his purported suitors. When rumours linking him with a move to United first came to light, I was inclined to dismiss them as idle paper talk brought about by the need of football journalists to fill their column inches. But the rumours persisted and Robin van Persie became a Manchester United player.

Let me be honest. I wasn’t very keen on his arrival. Why? It certainly wasn’t because I didn’t think him good enough. Van Persie was on the back of an excellent season with the Gunners and Arsenal fans would disagree but Van Persie did carry the team on his own at times. So why my reluctance? Firstly, although United were pipped to the title by City on goal difference, the striking department was seemingly well stocked. Wayne Rooney, Javier Hernandez, Dimitar Berbatov along with Danny Welbeck, who had enjoyed a hugely impressive breakthrough season at United, formed a quartet that certainly wasn’t to be scoffed at. Berbatov did leave Old Trafford in the same window but other areas of the squad, namely the central midfield was perhaps in greater need of reinforcement. At that time, I viewed the signing as more of a luxury than a necessity. I couldn’t have been more wrong.

The initial press conference from the man was impressive enough. It was the first time I’d heard Van Persie speak and he came across very well. He said the right things and seemed genuinely excited to have joined us. From the now famous “little boy” inside him to how he signed off with a rallying cry of “let’s do this”, Van Persie was well on the road to winning the Old Trafford faithful over. But his real test was on the pitch. To say he has passed with flying colours would be a massive understatement. A constant feature in the team, Van Persie has 18 goals to his name in 23 appearances. In a season where clean sheets have been in a rarity for United, their position at the top of the table is courtesy of potent attacking play of which, Van Persie has more often than not been at the heart of. So how exactly has Van Persie made United a better team? Let’s have a look.

Key goals
A late brace against Southampton, 81st winner against Liverpool, dramatic injury time free kick against City and most recently, a delightfully well taken goal against West Ham in the FA Cup are all examples of Van Persie coming to the party when United needed him the most. At a club where late goals and drama are ingrained into their very being, Robin van Persie has fit right in. Goals against Chelsea, Arsenal and Liverpool have also shown that Van Persie is a big game player. Cometh the hour, cometh the Van it would seem.

Overall play
As impressive as his goal tally has been, Van Persie’s short Old Trafford career has had much more to it. With 6 assists to his name, he’s dovetailed with all of his strike partners well and in general his overall play has been exemplary. One dimension that has been perhaps missing from United’s attacking repertoire has been top class hold up play. Wayne Rooney has been playing in a deeper role and Javier Hernandez, despite his many attributes, is not the greatest player with his back to goal. Danny Welbeck is not lacking in this aspect but his relative inexperience means there’s still room for improvement. Things like catching defenders on the turn and picking up cheap fouls high up the field may seem small but are invaluable in a match. For instance, his lay off to Young in the build up to Rooney’s strike in the Manchester Derby is one United fans are unlikely to forget soon.

Leadership
At 29 years old, Van Persie is arguably at the prime of his career. With Wayne Rooney’s injury problems limiting him to 15 appearances so far this season, Van Persie has led the line admirably for United. A constant fixture in the United side, Van Persie has gotten United out of a few tight spots already as mentioned above. Perhaps, the most telling of his contributions was the game against Southampton. Having missed a penalty already, and with United 2-1 down, Van Persie came to the fore. His shoulders could have easily dropped after his penalty gaffe but like any world class striker, the miss was soon forgotten and subsequently made up for. Van Persie is fast becoming United’s “go to man”.

Set Pieces
In the recent past, much to the angst of supporters, United have posed a minimal threat from set pieces particularly from corners. A corner failing to clear the first man was a sight we had become accustomed to. But things have definitely taken a turn for the better. Robin van Persie has taken over corner duties from the right and Wayne Rooney from the left. The delivery of both has been up to the mark and it comes as no surprise that this has coincided with more goals from the defenders with both Evans and Evra finding the back of the net on numerous occasions. He provides an added option of a left footed free kick taker as well. Another perhaps unnoticed trait is his defensive duties in set pieces. Patrolling the near post area, his clearances have been important especially considering United’s defensive struggles this season.

A non-footballing aspect that has endeared Van Persie to United fans is that he just seems to ‘get’ United. He seems glad to be here and says all the right things in his interviews. Halfway through his first season, Van Persie has already made his mark at United. Just how far he can go at Old Trafford remains to be seen. I, for one hope to hear him serenaded with the “Oh Robin Van Persie” chant for at least a few more seasons.

3 responses to “Van Persie’s Story So Far In Red”