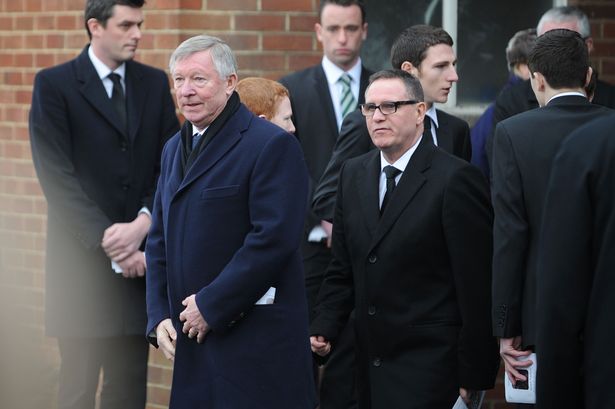 Sir Alex Ferguson was a close friend of Celtic legend Sean Fallon, who died last week aged 90. The Manchester United manager delivered the eulogy at Sean’s funeral Mass in the Church of Christ The King in Glasgow earlier today.

Fallon, a Sligo-born defender, made over 250 appearances for Celtic in the 1950s. He was also assistant manager to Jock Stein when they won the European Cup in 1967. Meanwhile, Fergie was assisting Stein with the Scottish Football League XI (a representative side that played against the English Football League and other national teams regularly), so perhaps that’s where their friendly relationship began.

Ferguson told the congregation that he was there to pay tribute to “a great man”.

He said: “I think it’s very difficult for people who are successful to remain humble, it’s a touch of greatness. Sean always had that greatness. Through his background, his upbringing, his Irishness, that breeds humility and also loyalty, he would never let you down.”

Although Ferguson grew up a supporter of rival Glasgow side, Rangers, rivalry never came across his mind when Fallon was considered. He also spoke about how Fallon had an eye for developing young talent – an aspect the best Scottish managers have in common. Sean, however, worked alongside Stein to create the greatest Celtic team of all time.

He said: “That was the structure that I think helped Celtic become great and to become the first club in Britain the lift the European Cup.”

While Seán Fallon will be remembered by many for being a Celtic legend, Ferguson added some personal insight to the eulogy.

“Over these years he became a great friend of mine and a great supporter of me. He had great observation, which I must say only Cathy’s got. He said he could tell, watching me on the telly, when I’m angry and when I’m happy. I thought I was always angry. What a fantastic man and it’s a privilege for me to be here.”