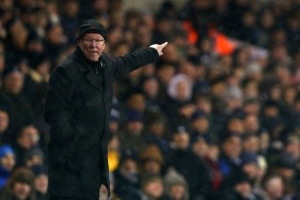 The Football Association contacted Sir Alex Ferguson tonight asking him to explain the comments he made to the media about linesman Simon Beck.

Ferguson branded Beck’s performance “shocking” after he failed to flag a clear penalty when Wayne Rooney went down inside the box after a challenge by Steven Caulker in yesterday’s 1-1 draw against Tottenham at White Hart Lane. The Manchester United manager recognised Beck who was the same linesman that failed to rule out an offside Didier Drogba goal in 2010 at Old Trafford.

The FA confirmed this evening that they have contacted Ferguson asking him to elaborate on his observations. He has until 18:00GMT on Thursday to respond. Unlike the rest of the squad, the United boss has not gone to Qatar because of a charity commitment.

If the FA penalise Ferguson over his comments on Beck, they will charge him with misconduct and he could be hit with a touchline ban or fine. I personally don’t think it’s serious enough for a touchline ban but you never know.