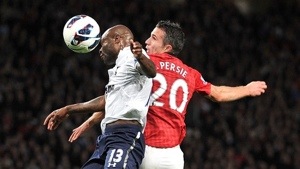 Premier League leaders Manchester United will be out for revenge as they look to deny Tottenham a double today at White Hart Lane. The London side beat the Reds in September, ending their 23 year wait for a win at Old Trafford.

Sir Alex Ferguson’s men will be keen on avoiding a repeat of that loss today as they aim to keep their 7 lead gap on top of the Premier League nurtured. After beating Liverpool 2-1 last weekend, it should give them enough confidence to cross the line.