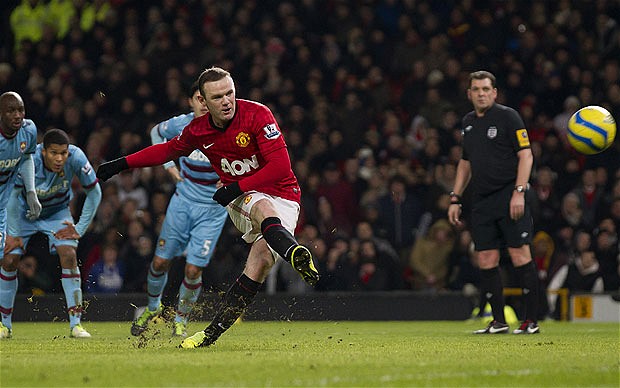 Wayne Rooney missed from the spot last night against West Ham in the FA Cup. It was his 10th overall blunder from the spot as a Manchester United player, proposing the question whether he should remain our penalty taker.

Sir Alex Ferguson turned away in disbelief after watching Rooney balloon the ball over the bar. Jordan Spence’s handball inside the box resulted in a terrible penalty from the England international, keeping West Ham’s hopes alive for a further 12 minutes.

Although it was great seeing Rooney score the only goal of the game to clinch our place in the fourth round, you still expect a player of his class to do so much better from the spot by at least making the goalkeeper work.

Looking at the stats, Rooney has a penalty success rate of 66.7% in the Premier League (14/21). In the Champions League, however, he has a 100% record scoring four from four. Should last night’s blunder be the last time he takes one in a United shirt, particularly when Robin van Persie is on the pitch at the same time?

Speaking to reporters after the game, Ferguson had his say on the whole penalty dilemma: “I don’t think it is just one of those things. I think we have to improve at that. If you get a penalty kick, really… there has been talk about Rickie Lambert at Southampton scoring 31 out of 31. That is what taking penalty kicks is all about. There have been several great examples over the years – Matthew Le Tissier scoring 47 out of 48. A penalty kick is your opportunity to take advantage of a foul or a handball or whatever and score a goal.”

One response to “Poll: Rooney’s spot of bother with penalties”