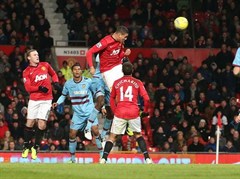 With Jonny Evans absent with a hamstring injury and Nemanja Vidic and Rio Ferdinand both rested after the win over Liverpool, Phil Jones and Chris Smalling started together for the first time since December 15. As a result, Sir Alex Ferguson praised both following their performance in Manchester United’s 1-0 FA Cup win over West Ham at Old Trafford.

Several fringe players got a run last night with Ferguson making 10 changes from the team that won on Sunday. The defence, in particular, impressed the boss. It consisted of Rafael da Silva, the ‘impressive’ pair and Alexander Buttner.

Speaking to MUTV, he said: “Jones and Smalling were fantastic, absolutely brilliant. The two of them were absolutely marvellous and I couldn’t be more pleased.

“They have been injured for a while and needed games, so today would only help them. We have several other players who needed a game like Nani, Wayne Rooney, Anderson and Alex Buttner.

“So we had six players who had a run-out at a crucial time of the season with Real Madrid coming up and Tottenham on Sunday, so that is good news for us tonight. We missed a lot of chances tonight really and we played some good football at times.

“The 15 minute period after half-time was the hardest for us because they just knocked that ball into the box, there were so many bodies all shoving all over the place. You really have to handle that and thankfully our two centre-halves were absolutely magnificent in how they dealt with it.

“It was a physical contest to be under and you have to stand up to it.”