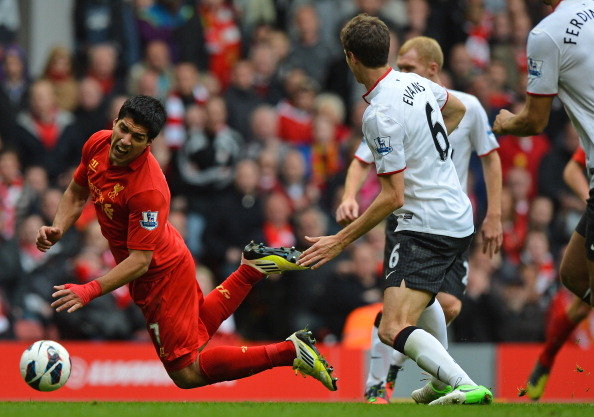 In an interview aired today in Argentina, Luis Suarez stupidly claimed the English media are controlled by Manchester United. Given the fact he’s a representative of Liverpool Football Club, a statement of this nature hardly comes as a surprise with their list of laughable conspiracies.

Suarez went on to accuse the English media of unfairly treating him and his South American compatriots differently to native players. When you have a track record like the Uruguayan, what do you expect? If attacking a fellow footballer with your teeth doesn’t give others a bad enough impression, I personally feel racially abusing another will. Not to mention his obsession with cheating.

He said: “When someone comes and says to me something bad about being a South American, I don’t cry, because that happens inside the pitch. I have my conscience clean. But as I have said: Manchester United controls the media, they are powerful and the media will always help them.”

He sounds like somebody on the edge, losing their mind and becoming increasing deluded by the minute. Sound familiar? Take a look at Kenny Dalglish, who made a mockery of Liverpool FC while blindly defending Suarez despite committing racist behaviour.

If Suarez was in any way intelligent, he would concentrate on his football. Nobody can doubt his talent on the pitch. However the Liverpool striker seems a tad obsessed with controversy, unwilling to shut his mouth and move on from previous incidents.