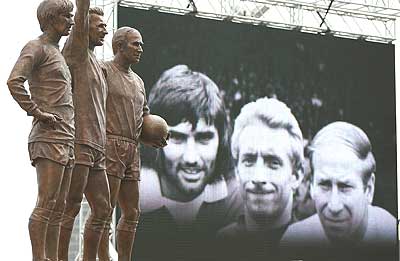 The United Trinity has in recent years become known as a work in bronze by Scottish sculptor, Philip Jackson, who recently produced a statue of Sir Alex Ferguson outside the old North Stand. It depicts three Manchester United legends from the 1960s – George Best, Denis Law and Bobby Charlton. It was unveiled on the fortieth anniversary of United winning the European Cup.

However, ‘The United Trinity’ is not just a name given to the statue. Many fans used it when talking about the three players listed, so that’s where it came from.

Anton Alfy, who features regularly on Stretty News, has popped up again with another classic. Over 12 minutes footage of Best, Law and Charlton. What else could you ask for?