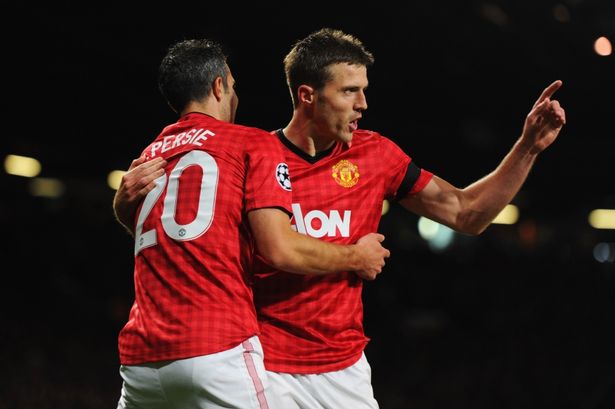 It was always going to be a tall order having to replace a firm fan favourite, and a man that Sir Alex Ferguson who has managed a deluge of talent over the years, described as his greatest ever signing.

Roy Keane’s tumultuous exit from Old Trafford needed fixing quickly to appease those fans who believed that the fiery Irishman still had something to offer at M16, and the then Tottenham midfielder Michael Carrick was entrusted with the task; with the added burden of a hefty transfer fee hanging over his head.

Having surpassed 200 league appearances for United in the New Years Day victory at Wigan, and at the ripe old age of 31, the Geordie is finally silencing his critics with his displays so far this season, and is undergoing a renaissance that’s been a long time coming.

Carrick has had his fair share of critics throughout his time with United, and despite a medal collection that is the envy of players around the world, the Champions League winner has only 26 England caps to his name.

This is dwarfed by Liverpool captain Steven Gerrard, who recently joined the Three Lions’ 100 club, but has a fraction of the club honours Carrick can lay claim to.

Having been a mainstay in the heart of the midfield of one of the biggest clubs in Europe for over six years, is it not strange that a player United has had so much faith in has featured so rarely for his country?

There has never been any doubt  of Carrick’s immense talent. In the six seasons he has been at the club, he has shown glimpses of what he can do, driving from the heart of midfield and unleashing that thunderous right-footed strike he has so rarely treated the United faithful to.

His stunning double in United’s 7-1 demolition of Roma in 2007, his vital late winner against Wigan in 2009 to all but clinch the league title, his sensational pass in the build up to Wayne Rooney’s goal in the 2011 Champions League quarter-final against Chelsea, have all reminded us of his capabilities.

These significant contributions cannot deter from the fact that the powerful midfielder has predominantly frustrated throughout his United career to date, and has certainly flattered to deceive on a regular basis.

One of the main points the more vociferous Carrick critics reiterate is just how negative he is. Despite having the capacity to spray 40-yard passes, from all manner of positions, he often takes the easy option, with a pass backwards greeted with groans on the terraces.

It is all well and good when players who haven’t got the natural talent that the tall lad from the north-east possesses take such an approach, but those who see him week in, week out, know he has the skill and accuracy to turn defence into attack with a blockbustering run or a ranging pass.

He has always done a job for the Reds, even when asked to fill in at the back, and is a great example to aspiring footballers everywhere of how to go about your everyday life as a professional footballer. I don’t believe there is a more dependable footballer out there.

In the Champions League especially, he has been impressive over the years, controlling many tough away encounters with his ability to dictate the tempo of crucial games.

However, being reliable doesn’t guarantee you a regular starting berth in such a successful side, and a section of the United faithful has been growing increasingly restless at Carrick’s ever-presence in the side.

It also seemed that Sir Alex had run out of ideas to get Carrick to believe in his abilities, when Paul Scholes was asked to come out of retirement in early 2012. The whole thing just reeked of desperation.

Yet again, we have all been proved wrong by our illustrious manager, as the evergreen local lad has been a huge success after returning to the hallowed Old Trafford turf.

It is safe to say that Carrick and Scholes together on the pitch doesn’t work, as a severe lack of urgency to attack between the pair has become all too apparent on several occasions this season.

But when Carrick has been partnered with a younger, more energetic partner in the centre of pitch, he has come into his element.

The new season has seen a more invigorated, more adventurous, more gung-ho Carrick. He has not been shy to put his foot in; when before he may have held off. The range of his passing has been out of this world, and is having a game-changing effect of immense proportions.

The Newcastle game was a prime example of how the former West Ham youngster has started taking games by the scruff of the neck, and influencing the outcome of these crucial encounters.

Locked at 3-3 in the pouring Manchester rain, United were missing chance after chance to win the game to maintain our lead at the top of the league over those noisy neighbours, and it seemed that a point was the best we could hope for.

Carrick had other ideas. In the 90th minute, when all others around him seemed to be losing their heads, this cool customer produced a  pin-point cross for Javier Hernandez to tap home the winner, and send Old Trafford into raptures.

He is not one to take the plaudits, and has often been quoted that his goal is to remain in Sir Alex Ferguson’s plans, and that is it.

It is pleasing to see that a player with such a refreshing attitude is undergoing a renaissance in the latter stages of his career, when others would have simply fallen into stagnation.

Never has the phrase ‘it couldn’t happen to a nicer bloke’ been so applicable.

Long may his form continue, and hopefully Roy Hodgson will see that the midfield anchorman can still do a job for his country, and be an experienced head in a young, transitional side.

More importantly though, let’s give him the encouragement he needs to maintain these forays in opposition territory, as at long last Michael Carrick has taken on the mantle that the number 16 shirt commands, and is creating a legacy of his own.

One response to “Carrick at long last lives up to potential”