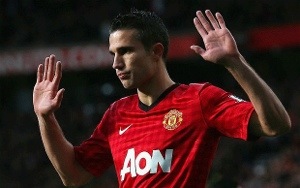 Yes, the title is rather simplistic but it is as precise and accurate as our clinical Dutchman’s finishing. We are just about over halfway in our quest to reclaim the title from the noisy neighbours, we are sitting pretty comfortably on top of the table with a 7 point cushion ahead of them. Recently as well as shoring up the uncharacteristically leaky and susceptible defence, we have been playing some scintillating stuff at the other end, culminating in a sack load (maybe a bit late for Christmas puns) of goals and blowing teams away in a ruthless fashion which is something we are accustomed to, see the demolition job inflicted on Wigan a few days ago for this evidence.

It is certainly reassuring to see this new-found defensive solidity combined with our typically fluid and fast free-flowing football. The big reason we are currently in such a profitable position in the table is down to our big-money purchase, now seemingly a very charitable act from Arsene Wenger.
Granted, £24 million is hardly charitable when you look at the hard figures, given the questions surrounding the transfer- the price tag, the age, the rotten injury luck in years gone by – many saw the Robin van Persie transfer saga as a significant gamble from Sir Alex Ferguson. That said, the manager has not made too many transfer blunders during his tenure at Manchester United, the sole way to prove the doubters and haters wrong from Van Persie’s perspective was to deliver on the pitch, and boy has he done that.
Ever since Van Persie’s first day in Manchester, everybody associated with the club has been taken aback with his persona and clinical ruthlessness on the field. His first press conference was just a taster of what was to come: “The little boy inside me screamed for Manchester United”. Talk about saying the right things and introducing yourself to United’s contingent. From the outset, he made the right impression, it wasn’t long before veterans Ryan Giggs and Paul Scholes were waxing lyrical over the Dutchman, and they are good judges of talent having played with some the best players to have ever graced the beautiful game.
His first goal for the reds was typical of the man – graceful and class. He latched onto a Patrice Evra cross on the run, and swept the ball on the half-volley with unerring accuracy into the Fulham net, the roar that greeted that waft of his left-foot wand was deafening, a star had announced himself on the Old Trafford stage, the biggest stage. Since then, he has not looked back, a hat-trick at Southampton, winners at both the Emptyhad and Klanfield (definitely two of the better ways to endear yourself to the United fans, and maybe even be considered a legend at such an early phase). When the spotlight was firmly cast upon his shoulders against old club Arsenal, Thomas Vermalaen made a critical error, the Dutchman on his supposedly weaker right-foot arrowed it first-time across goal and inside a minute we took a vital lead and went on to win. To be so clinical and devastating at such an early stage of the game, he was probably nervous after being inevitably jeered by the away contingent, speaks volumes of the man, he is ice cool when it matters most.

Van Persie not only boasts an already burgeoning goal record (19 strikes upon writing) but in this collection there have been an array of various beauties. There has been effortless high-quality, calm finishing, the left-foot pass into the top corner in our recent victory against Sunderland, combined with the ability to be a serious threat from set-pieces. He has provided from our right-sided corners with his inswinging delivery for the likes of Patrice Evra and Jonny Evans to become an increased danger in the opposition box. His winner against citeh albeit deflected was a direct free-kick-during his Arsenal days Van Persie developed a knack of scoring from dead balls and becoming a set-piece specialist, something we are now witnessing at United and something we have not possessed since Cristiano Ronaldo’s departure.

It is said that sometimes you can be a victim of your own success, the only low point thus far though was when he got the ball booted at the back of his head by Swansea’s Ashley Williams, even in adversity he still oozes class, he responded a few days later with a crucial equaliser against Newcastle and an all-round quality performance. Those who labelled him as ‘injury-prone’ (probably bitter, fickle Gooners AKA Piers ‘chins’ Morgan) were callous and ill-advised. Van Persie has been present in every Premier League game for nearly two years now, miraculous really given his previous injury demons. He has found a way to avoid injury and to keep himself in prime condition to be at his best, it was to Arsenal’s benefit last year, and we have certainly been the beneficiaries from his new-found clean bill of health.

Inevitably, with success not only brings pressure to keep performing at such levels but also comparisons with club legends from yester year. It was apparent following the blues of last season that the club needed a galvanising effect, someone to ensure we would not be left in the wake of our bitterest foes. Which is precisely why there was such a clamour for his signature in the summer of 2012. If that lot had managed to sign him, it would most likely be them who would be boasting a seven point lead by January, we could not afford to let such a high calibre player slip through the net to them of all people.

Such has been Van Persie’s impact in transforming our side, comparisons have been drawn to the one and only Eric Cantona. Most readers will have been privileged to have witnessed ‘le dieu’ in action. He was credited with transforming the fortunes of United, who were the sleeping giants of English football upon Cantona’s arrival, having not won the league title for 26 years, Cantona was the catalyst of a seismic shift in English football and ensured United dominated the majority of the nineties. His arrival generated huge publicity, given he was bought from one of our rivals at the time in Leeds United and he launched an era of unprecedented dominance that is still untouched today, United have still won more Premier Leagues than all our rivals combined.

Van Persie has brought with him an air of class and a glut of goals along the way. He has almost notched 20 goals, Chicharito has already scored as many as he did in the entirety of last year, Danny Welbeck and Wayne Rooney have not been as prolific has last year’s exploits, their partnership has been adjourned due to the Dutchman’s arrival. One blot on the United book has been the decreased number of strikes from Rooney, but he has arguably been displaced as United’s main man. In his recent absence, Chicharito has flourished alongside Van Persie, even when RVP and Rooney were together, Rooney was dropping deeper and deeper to collect possession and link play with the Dutchman. This is probably a sure indication that Rooney will eventually be converted into a midfielder, he likes to play in the classic no. 10 position behind the main striker anyway but the manager has earmarked Rooney as a future central-midfielder in the ilk of Paul Scholes.
This year more than any, we do not need any extra motivation to reclaim the title from the noisy neighbours but it is plain to see that Van Persie is probably hungrier than anyone for a trophy. His appetite and desire to be successful is driving on a United side who were in a transitional period last season but are a year older and better off for it, even the seasoned pros have been left aghast with the Dutchman’s quality. Given the fact that he went seven barren years without success in an Arsenal shirt, it is no surprise that he has produced performances of pure class, our number 20 is clearly eyeing up our twentieth title, the main reason he took the number 20 on his shirt. Endearment attempt or playing games with the media with that statement, Van Persie is a man on a mission this season.

Given our current healthy position at the top of the tree (yes it is not over, we know what happened last year) if RVP stays fit, the title will be ours. Simple as that. Everyone now go and find the nearest bit of wood and touch it hoping he stays well clear of injury.

He is Robin Van Perfect.