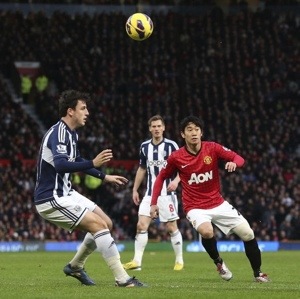 1. In a lot of games this season, luck has been on our side when securing three points. Some journalists have even gone to the extent of labelling Sir Alex Ferguson’s current squad his worst. While we have been leaking silly goals for fun, I saw an improvement at Old Trafford yesterday. As expected, Nemanja Vidic’s return from injury is having a positive impact on the team, combining with Jonny Evans to offer enough support for David de Gea who completed a well overdue clean sheet.

2. Although conceding goals has been an issue, scoring has been the opposite. Robin van Persie scored again against West Brom after resting on the bench for the first half. The minute he came on he created enough space inside the box to shoot, but his attempt was blocked. He does it so often, you always expect him to score. Hopefully Danny Welbeck can learn from this throughout the season because it’s important we keep the homegrown aspect in our squad. Other than Van Persie’s winner, United’s opener came from an own goal. An Ashley Young cross bounced off Gareth McAuley before hitting the net.

3. Nemanja Vidic wasn’t the only Manchester United player making his first start since returning from injury. Shinji Kagawa made his first appearance since October, impressing Reds and becoming a trending topic on Twitter. Despite being substituted after 66 minutes, Kagawa successfully completed 97% (30/31) of his passes. He has made a terrific impression since signing from Dortmund during the summer, so long may it continue. All in all, Kagawa is an extremely intelligent footballer and I’ve really enjoyed watching him so far.

4. Without a shadow of a doubt, we saw the best performance from Antonio Valencia in a long time. He’s not having the greatest of season’s and I’m starting to wonder whether it’s down to more than confidence. When you think of Valencia, you see a strong winger with an incredible amount of pace. We’re still waiting to see that consistently this season. There isn’t many direct wingers around better than Tony V when in form. Since joining from Wigan in 2009, he has been a good servant to the club.

5. Seen as we haven’t discussed it in a while on SN, the goalkeeping situations seems to have been put to bed at long last. David de Gea has the potential to become the best keeper in Europe but he won’t learn from mistakes sitting on the bench. Fergie’s decision to start Anders Lindegaard ahead of our 21-year-old Spanish keeper last month left me baffled. Lindegaard does a good job between the sticks, but Dave is already a lot better.

I also believe the constant switching and rotation within our back four isn’t helping the matter. And I know, injuries have taken their toll. It can’t be easy for any keeper.

6 responses to “Quick Reaction To Win Over West Brom”