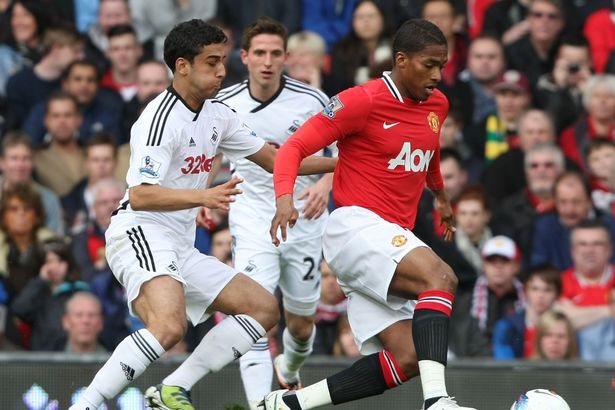 Last three matches between the teams
United 2 Swansea City 0. Paul Scholes and Ashley Young netted in last season in the fixture in May 2012.
Swansea City 0 United 1. Javier Hernandez scored the early goal in this match in November 2011 to secure the three points. United 2 Swansea 1. Frank Stapleton and Captain Marvel scored for United in May 1983 to keep the points at Old Trafford. Davies netted for the Swans. Swansea were relegated that season from League Division One, along with Manchester City and Brighton and Hove Albion. Notably Manchester United won in the replay of the FA Cup at Wembley 4 – 0 to seal the fate of Brighton. The United goal scorers on the day Bryan Robson(2), Arnold Muhren and Norman Whiteside.

The last occasion when Swansea City beat United was at the Vetch Field in 1982, strikes by Curtis and James giving the South Wales side a memorable 2 – 0 victory. Swansea however finished the season in League Division One in 6th place with 69 points on the board, United were in 3rd spot. United’s nemesis at the time in the league, Liverpool winning the league title 9 points ahead, with Ipswich Town in 2nd place with 5 points more than United, who garnered 78 points in that seasons campaign.

What the managers had to say before the match
Sir Alex Ferguson speaking with MUTV about utilizing the squad as United go into a hectic series of fixtures after the visit to South Wales today, Wednesday – Saturday – Tuesday – Saturday the Boss acknowledged the need for a great squad. “Absolutely. No doubt it won’t be the same team in any of these games. There will be changes each game. We’ve got a few bumps and bruises, Carrick got a bit of a tight hamstring last week so I took him off at half time in the game against Sunderland but we’re alright and not too bad in terms of players availability.” Sir Alex had this to say regarding Swansea City’s incredible rise from the lower divisions of the football leagues. We’ve seen the results Swansea have had and the progress they’ve made as a football club, but the way they do it is the important thing for me. They try to play and have the courage to play their football which is good to see.”

Michael Laudrup had this to say “It’s important to look at the bigger picture,” said the Dane. “We are coming up to the halfway point of the season and whatever happens between now and then, we will have 23 points on the board. That is three more than at the same stage last season.” Laudrup continued “But the next six or seven weeks are critical for us. If we suffer a couple of defeats it’s not a problem because we have so many games coming up. Of course we would like win on Sunday, but if we do there will be a lot of focus on the club again. My focus is on the next four games, but we have to take one game at a time.” Michael Laudrup had this to say on his peer Sir Alex Ferguson ” Sir Alex is a legendary manager and they have some great players. It is unique to see someone stay at a club for so long and what he has achieved during his time there is incredible and very special.”

Swansea have the Swansealona label which is very kind, but inaccurate. Barcelona’s passing is generally in the opposing teams half while attacking. Swansea’s possession is generally in their half of the pitch, it’s attractive to watch, but not attacking. On the back of two consecutive defeats against Norwich and Tottenham Hotspurs, Swansea will be seeking to not make it three losses in a row. It’s worth noting in the Swans home tie in February against Norwich, Paul Lambert’s then team, pressed Swansea high up the park. Michel Vorm their excellent Dutch goal keeper was forced to kick the ball long, being allowed no time on the ball with Norwich City’s forwards pressing high. As a consequence only 23 of Vorm’s 33 passes found the intended target.

Norwich had the least amount of Yellow cards (40) last season in the Premier League, although they did collect two Red cards, so not a dirty physical team.

With Manchester City recording another late – late win yesterday in beating Reading at the Etihad 1-0 with an injury time winner by Gareth Barry, they are keeping right on United’s coat- tails. There is no leeway for a banana skin loss in South Wales as United’s front men continue to outscore the opposition in most cases. The goals for column looks very healthy, with United (43), City (34), and Arsenal (32), which is brilliant. The goals against column however is disappointing reading with only Spurs (25), and Norwich (27), having shipped more goals in the top ten teams in the league than Manchester United (24), at almost the half way point of the season. In striking (or defending ability) contrast Stoke City have only conceded a miserly 13 goals to date. Swansea themselves have conceded 22 times at the 17 matches completed point in the season. Therefore goals will be at a premium in South Wales today and United will have to be at their very best to win with a relatively frugal Swans defence.

United’s firepower in attack with 15 different players contributing in scoring goals should determine the three points head back to Old Trafford from Wales. The brilliant summer signing of Robin van Persie the needed statement of intent leading the way, scoring 12 league goals in 17 matches to – date. The Dutchman in doing so scoring the winning goals, have meant 18 points for United. The ex Arsenal man settling the points in United’s favour against Southampton, Liverpool, West Ham United, Reading, and Manchester City in the league alone !

However as Michael Laudrup implied, one game at a time, an old cliché but an apt one on tricky visit to the semi finalist’s of the Capital One Cup, Swansea City.