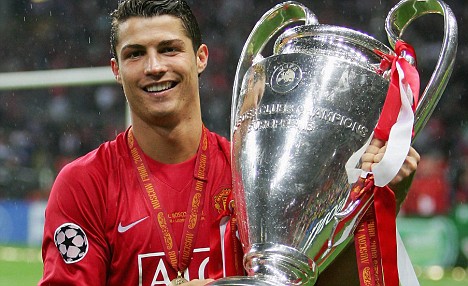 It was bound to happen sometime. Cristiano Ronaldo left Manchester United in 2009, but has not returned to play his former club just yet. However, United were today drawn against Real Madrid in the Round of 16.

When you think about the Champions League, you imagine big clubs like United, Madrid and Barcelona. A tie of this nature reminds us all of how significant the tournament is. The last time the clubs met was in 2003 when the Spanish giants knocked us out in the Quarter-Finals.

The Bernabéu is one of the main positives for travelling supporters. There aren’t many stadiums in the world worthy of being put in the same sentence as it in terms of being spectacular. Sir Alex Ferguson will also come up against Jose Mourinho, who he already out-mastered while the Portuguese manager was in charge at Chelsea.

Speaking of Mourinho, there has been a lot of talk about who will become Manchester United manager when Ferguson retires. The Scot has already spoke to Mourinho and Pep Guardiola about the future, so your guess is as good as mine. Although, I’ve no doubt that it will be the topic of conversation when they share a bottle of red wine after each fixture.

The Spanish champions have been relatively poor this season, with them 3rd in the La Liga 13 points behind league leaders Barcelona. In the groups stages, however, Madrid finished 2nd below Borussia Dortmund with Ajax qualifying for the Europa and City last.

The main man coming up to the fixture will be Cristiano Ronaldo. He has scored 14 goals in 16 games but Madrid have still struggled. Obviously if we can keep him under control, which is a big ask, United shouldn’t have many difficulties.

Being honest, it’s not the draw I wanted. Getting to see Ronaldo at Old Trafford again will be brilliant, but the easier draws always appealed to me more so. I understand why neutrals are chuffed with it but I would have preferred a team with less superstars. No offence, Celtic.

Ronaldo will get a warm reception, but hopefully after the second leg himself and his team-mates are seen sulking in disappointment. Madrid have proven this season that they’re beatable.

4 responses to “Champions League: United Meet Madrid In Last 16 – What To Make Of It”