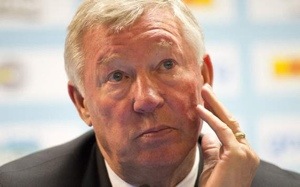 So expected is the answer from Sir Alex Ferguson, when posed the question whether his squad will be strengthened in January, it has almost become cliched. When it comes to potential wheelings and dealings during the winter transfer window, the manager’s blind eye is firmly cast over those who are paying extortionate and hyper-inflated prices.

Such snorts of derision mean, in essence, that January 31st for Manchester United fans is a day of suffering. Almost akin to your school days when all the other kids were having fun in the playground, kicking a football around the yard, but you are stuck in detention. Life is a bitch sometimes. Transfer deadline day, which should arguably be a national holiday, with all it’s unpredictability, mayhem, excitement, surprise, euphoria and over-dosage of Sky Sports News’ Jim White is seemingly an exclusive soiree to which Manchester United are not invited by choice.

The manager’s repetitive affirmation that there is evidently no potential for frugal transfer dealings in the January window due to ridiculously inflated touted prices shows that he has an unreserved faith in his current crop to get us over the line and reclaim the title, knowing full well that City could feasibly go out and buy practically whoever they please in their attempt to overhaul our current lead. Another point that does not automatically come to mind is the deeper financial implications that could stem from this upcoming window: this is arguably the last period of transactions in the winter where teams could feasibly go hell for leather with their dealings, given the fact that the footballing ‘authorities’ are looking to clamp down on elaborate and care-free spending, with the financial fair-play rules due to be introduced from the start of next season. It is now or never for some clubs to bolster their squads on a significant level.

Who could blame the manager really for adopting this sensible approach to the market? He must have thought he had got tickets to the latest dose of stand-up comedy when he saw the prices from last January’s window. £50M was spent on Fernando Torres, who has Chris Kamara put, “couldn’t hit a barn door with a banjo”. £35M on Andy Carroll, one of the best transfer trolls and the world’s most expensive donkey. Ferguson was probably quietly sniggering at the critics who questioned a seemingly somewhat negative mentality towards the window.

This is why Ferguson has become the top dog in football management. He knows precisely when the time has come to do a deal for the club which suits both our footballing and financial needs. The regular snap from fans that the transfer window in the winter is dull from our perspective has truth to it, but considered perspective is required: instead of joining the clamour for players at unfathomable prices, Ferguson has been ahead of the rest not just in terms of making his United dynasty unparalleled but also with his acquisitions- completing deals ahead of the rush and getting in there first when the price is good. Therefore, as Ferguson does his transactions in the summer, there is no need to panic come winter time. Rather than splash unnecessary reserves of cash now, he bides his time and scours the market so when summer comes the prices for his targets are significantly deflated and markedly more viable for our club.

On the football side of things, if we look at our squad now, there are no real causes for concern with our crop of talent, meaning the cheque book is not desperately required now.

We have two good goalkeepers, one in particular has the talent to be one of the best, if he is kept out of this rotation palava, you know who I mean. In defence we have a number of options, especially with the pleasing return to form and fitness of Phil Jones and Chris Smalling, and Nemanja Vidic soon to join those two if he is nurtured back rather than rushed like at the start of this season. The question ‘will he, won’t he?’ regarding the future of Rio Ferdinand means there is potentially an area for the manager to look at- there has been rumours of Ryan Shawcross and Kurt Zouma, but it is not a grave area that needs to be currently addressed.

Midfield is arguably the area to zoom the microscope in on: Ryan Giggs and Paul Scholes are coming to what will be a tearful end. The worrying and rather sad story of Anderson playing himself into a bit of form then getting derailed by injury just as he is looking like the permanent solution to Paul Scholes is becoming far too familiar and tragic. That said, we still have a plethora of talent in the engine room, with Tom Cleverley getting better and better with every passing game, Shinji Kagawa to return off the injury table, Mr.Consistent Michael Carrick, Darren Fletcher will be a vital squad player in the remaining months, and promising kids Nick Powell, Angelo Henriquez and many more from the U21 setup could all put their hand up this year. There is no immediate necessity to bolster this area. Only in the summer, when Giggs and Scholes will call it quits will this need to be addressed.

Yes, there is a lot of talk revolving around United’s latest scapegoat Nani. People are hearing on their grapevines that he will be packing his bags, even if Nani leaves we will still have options on the wing, Kagawa has played there for Dortmund, Cleverley, Rooney and Welbeck for England.

There is no way that our striking quartet of Rooney, Van Persie, Welbeck and Chicharito will be touched, if it ain’t broke don’t fix it.

Ferguson always has something up his sleeve and although has seemingly totally written off our transfer prospects in January, it is not like he goes into a period of transfer hibernation, he has scouts who will continue to scour the globe- Zouma, Porto’s highly-coveted winger James Rodriguez and Dortmund’s prolific striker Robert Lewandowski have all been watched this season on more than one occassion, Zouma was even invited to tour Old Trafford.

So although Ferguson is very content to see us sit in detention on Transfer Deadline Day, you can be sure he is already preparing for business in the summer.

2 responses to “Window of opportunity does not appeal to Ferguson”