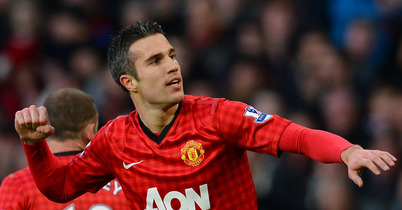 Manchester United defender Chris Smalling is amazed at how quickly striker Robin van Persie has adapted to life at Old Trafford. The former Arsenal captain was top goalscorer in the league last season and he has come to Manchester building on that terrific form.

Van Persie has already scored 15 goals in 21 appearances for United. Wayne Rooney is also delighted to have a striker of such pedigree in the squad, forming an outstanding combination with the Dutch international. Rooney was the second highest scorer last season, meaning United have the top two goal scorers from the 2011/12 season.

Smalling finds Robin van Persie’s progress remarkable given the fact he didn’t have much of a pre-season. Barely 24 hours after completing his move from Arsenal, Van Persie was handed his debut at Everton in August.

“I saw the finish,” said Smalling. “It wasn’t easy to put it in that top corner but he is a quality player. Obviously he only came in the summer and didn’t have much of a pre-season. But he came straight into the matches and has been such a threat. He is putting teams on the back foot and making our job easier at the back.”

I think everyone at the club, including Sir Alex Ferguson, is surprised with how fast Robin van Persie has settled at the club. All the players are full of praise and he’s not only scoring goals, but assisting them too.

“He has a fantastic record,” said Ferguson. “What you are seeing is a player who has come to his mature years. Experience is counting for him now. He has the knowledge and ability and last season his form was terrific. Even Arsenal, having had him for a few years, were realising what his best position is. We do the same.”