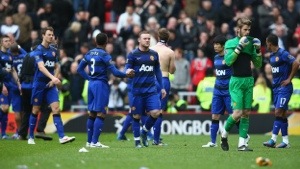 Sunderland manager Martin O’Neill is hoping for a hat-trick of wins against Manchester United. He became the only manager to achieve two wins with different teams, Leicester City and Aston Villa both at Old Trafford. The Black Cats arrive at Old Trafford on the back of an excellent home win on Tuesday evening against relegation threatened Reading, however only their fifth win in 30 games. Should the Black Cats pull off a remarkable victory today it will be the first time they have recorded two consecutive wins since February.

United have now conceded 23 goals in the league. Only Tottenham Hotspur in the top 10 have a poorer record. Sunderland, 15th in the table, have conceded 21 goals up until today in the league. As we know United’s saving grace, the firepower in attack netting 40 times in 16 matches (the second best ever, only in season 2000-2001 United scored 41 goals in the first 16 matches). Sunderland have registered 17 goals in 16 outings. Wayne Rooney and Robin van Persie have a combined goal scoring tally in 16 league games, 17 goals, the same as all of the Wearsiders. The two teams that were relegated last season both scored more goals than Sunderland (45 goals), Blackburn and Bolton. Stephane Sessegnon provided 36% of Sunderland’s goals and assists last season. The now departed from Wearside, Arsenal loanee, Nicklas Bendtner netted 8 times for the Black Cats, last term.

The Black Cats have not won at the Theatre of Dreams since May 1968 when their 2-1 win stopped United achieving back to back wins and allowed City to clinch the title as they beat Newcastle United on the final day of the league campaign. Notably the Belfast Boy scored in United’s defeat.

Sunderland last season drop deep and defend with conviction as they do this term, they recorded the most blocks of all teams (186) in the league, holding Manchester City to a draw 3-3 with 11 blocks, at the Etihad. Which in truth United could not achieve last season, with two defeats against City, in the league.

If we see Javier Hernandez today it will be the Mexican’s 100th appearance in all competitions for Manchester United. Similarly should Darren Fletcher make an appearance it will be his 200th in the Premier League. If John O’Shea makes his first appearance at Old Trafford since leaving 18 months ago the valuable versatile Irish man will no doubt get a much deserved warm reception for the 12 years service he gave United. It will be interesting to see who Sir Alex Ferguson selects as goalkeeper today, with Anders Lindegaard again available for selection after he missed the derby at the Etihad, due to birth of his first child. Congratulations Anders, but I, like most Reds, would want to see David de Gea in goal.

The United juggernaut is slowly building motion into gear with our Serbian rock back for selection the defence is going to be tightened up. Likely for this battle the much under-valued Jonny Evans will step aside (with a hamstring injury suffered in the derby win) to allow Nemanja Vidic some much needed game time. The manager explained “Nemanja is back in the squad, he is a top defender and our captain.”

Only 3 times in Premier League history have teams had the luxury of a six point or more lead at this stage of the season, United 1993/1994, United 2000/2001 and Chelsea 2005/2006. On each occasion, they’ve gone on to win the title. As we know, United are not in sparkling form blowing teams away yet. The table however does not lie, after our excellent much merited result at the Etihad Sunday past, the manager, as do we fans, want momentum to keep building and a convincing win against Sunderland today will be a bonus. On paper a very winnable four league fixtures on the horizon, Swansea City (A), Newcastle United (H), West Brom (H), culminating with an away trip to Wigan the day after the manager’s birthday. If United can thrash the Black Cats today the impetus for the team will build. The team that has been top of the league table on Christmas Day in the last three seasons has gone on to win the league. Titles are not handed out by Father Christmas however, United were 8 points clear of the pack last season with six games to go, a cautionary festive note.

What the managers had to say

Sir Alex Ferguson while not out for revenge against Sunderland given the way a section of their fans reacted on hearing the news at the Stadium of Light that Sergio Aguero had scored in jury time at the Etihad against QPR, almost the final kick of the season to win the Premier League title for Manchester City. The United players and staff were still on the field of play, heartbreaking. “It was disappointing given the number of players we have given them down the years, but there was no malice in it and there is no element of revenge”, said the Boss. He further emphasized “winning the game is more important for us given what we achieved last week. Now we really need to kick on and make sure we retain our lead at the top of the league”. Sir Alex also had this to say on Sunderland’s manager and the criticism he has been receiving. “There was a question asked of Martin last week about whether he still had the self-belief that was absolutely ridiculous”, said Sir Alex. “This is a guy who won three times in Scotland, reached the EUFA Cup final and the League Cup final with Leicester. It was an insult to ask him a question like that because he is an outstanding manager”.

Martin O’Neill: “The players have always been in decent spirits, but the midweek result has given us a boost and hopefully we can continue over Christmas and New Year. We’ve got a set of games coming up now which are particularly difficult. We go to Old Trafford with Manchester United a number of points clear at the top, so it’s a difficult game for us, but the winning of the game during the week has given us that confidence boost and we go there in very fine spirits. The next game will then take care of itself, one way or the other. These are different times now,we’ve a real battle on but as I’ve said we can go there with some confidence. We must play with some sort of freedom. You have to compete every single week in this league. The players must go out and play”. With a very tricky fixture schedule ahead for Sunderland what United supporters ‘ will want to see is the Black Cats do the Poznan when Manchester City visit the Stadium of Light on the 26th December, poetic justice. Not even on New Years day when the Mackems travel to Anfield, to hopefully inflict more misery on the Scousers. More turning your back? Seriously get behind your own team Sunderland with games against Southampton (A), Spurs (H) before Manchester United’s arch rivals on New Years day, Liverpool. You will be going down. If you don’t shout for your own team.

Will Sunderland perform and snatch an unlikely result or will United skin the Black Cats alive?