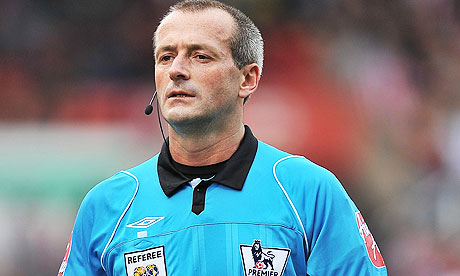 City v United at the Etihad on Sunday was what football, and English football in particular, is all about. That is no sideways reference to the foolish actions of a handful of mead-sotted fans, either. Joe Hart and Carlos Tevez, the latter surprisingly, as he had pettily lashed out at Phil Jones hind quarters just seconds prior, saw to that by intervening when a featherweight in a ridiculous outfit – seriously, can’t you support your club in a hat that doesn’t say “Mum, I’ve lost me mittens, again?” – came onto the pitch to discover if Rio Ferdinand, still bleeding and enraged from the effects of a tuppence donation delivered express from another unenlightened City supporter would mind terribly crushing him like a grape. Tevez restrained what was almost certainly an accommodating Rio, while Joe Hart reasoned with the undersized imbecile, explaining that he himself dwarfed the tiny interloper, whereas the United defender was even larger and twice as angry, despite having won, not lost, the match at the death in front of the home crowd.

Hart and Tevez’ class act had three effects. First, it protected the errant fan from the Wrath of Ferdinand. Second, it protected Ferdinand from fines, suspension, and litigation (don’t you just love the world in which we live?). Third, it provided some punctuation to the question that City players, even those not named Mario Balotelli, have increasingly been asking themselves as the adversities they expected to evaporate upon becoming Premier League champions have instead been suffocating every last measure of joy from that very accomplishment – namely, just what are we doing out here?

But that’s a question best asked in Italian. I said at the beginning that this match exemplified the English game, and, although it has played its part, I didn’t mean by featuring hooliganism or, for that matter, one hit wonders – not that I’m equating City to Blackburn Rovers; just saying that’s probably how they see themselves after crashing ignobly out of the Champions League with neither a victory nor a parachute into the Europa League, then losing their first home match in two years to their hated oppressors in red, and watching the gap between them double to six points. All that after being as noisy as they liked while looting the neighbors trophy cabinet last year.

No, it wasn’t the result that placed this game above the rest of the matches to date this year. The Christmas fixtures are still to come, as is a long second half of the season. City isn’t done by a mile. Six points may seem massive in the euphoria of the moment, but eight seemed a sure thing last April at Old Trafford, and we all know how that turned out. Nor was it a few inebriated louts who knew no better way to show their displeasure than to throw more money beyond the ridiculous ticket prices for which they had popped to watch overpaid, overgrown boys having a kick about on a pitch owned by a billionaire oil sheikh.

Put simply, it was the way these two talent laden squads went at each other from beginning to end, sparing nothing from their bags of tricks, that made this match a classic. Every tactic was explored, both positive and negative. The match opened with David Silva, Sergio Aguero and YaYa Toure flopping about like hooked fish on a dock, but then they got in the swim of things, with a series of daring runs straight through the heart of United. David de Gea was well tested but up to the task early.

While City dominated the middle of the pitch, United outflanked them, with the quick outlet from de Gea played forward by Evra, chested on to Young through the nick of time arrival of van Persie. Young then struck deep into the City defensive line before threading a pass to Rooney, whose shot against the grain may have lacked pace but had just the right ‘English” to direct itself inside the far post.

Of course it didn’t end there, with Rooney finding goal again, and Tevez coming on in the second half to rejuvenate the City attack. Van Persie’s curling volley off the woodwork, followed by Ashley Young’s dubiously disallowed goal somehow sparked City, who went down the other end, where de Gea desperately parried one shot, then, incredibly, another, before failing to reach an effort off the boot of Toure, the sequence simultaneously announcing game on and proving that sage philosopher Meat Loaf wrong. Two out of three was bad. City continued to press until Pablo Zabaleta, who is making a career from timely goals, leveled with just minutes remaining.

From that point, City turned back to a negative tack, with Tevez and Zabaleta giving Rafael and Ashley Young, respectively, lessons in Greco-Roman wrestling. Add to that Zabaleta’s knee to Patrice Evra’s kidneys and it was obvious that City felt they could break United’s spirit by adding injury to insult. However, Tevez took it one step too far; his foul from behind on Rafael setting up van Persie for another deadly strike. The sight of Samr Nasri ducking behind Edin Dzeko and sticking out his leg, rather than putting his body between the ball and his goal suggested that the commitment on this City team just doesn’t go as deep as that of United. It also suggests that of all the players to jump the Arsenal ship, van Persie is the only one who had the intelligence to go to a club where he would not only win, but also play a major role.

But I’m getting off track again. What I’ve been driving at is that this match combined everything that English football should be: tactical skill, physicality, creativity, mental toughness and sheer will. Perhaps the only thing missing was a driving rain. Even though results in the past two Champions Leagues hint that the EPL’s dominance over other competitions may be fading, it nonetheless embodies every facet of the game as no other European league does. Every aspect of that greatness was on view in this match, and I believe there is one person to thank above all others for that.

It’s not Fergie for raising another generation of world beaters. It’s not Arsene Wenger for not paying whatever it took to keep Robin van Persie at the Emirates. Nor is it Sheikh Mansour for buying a team, or Roberto Mancini for molding them into the perfect foil to test United as never before. No, the man I credit most for giving us this one hellacious match is the 23rd man on the pitch: referee Martin Atkinson.

From the start, Atkinson realized the potential of this match between the two best teams in the league; two teams that have forced Manchester to find a way to be big enough to hold both of them. Despite the flops of Silva, Aguero and Toure, and the hard tackles from both sides, he let the game continue.

The first yellow card didn’t come until the second half, and rather than for arriving too forcefully after the ball had gone, it was for speaking too freely after the whistle had sounded. Unsurprisingly, the recipient was a player who later proved he prefers to shy away from physical contact: Samir Nasri. Carlos Tevez also received a yellow for arguing, and it could be further said that, although his tackle was a bookable offence, Wayne Rooney might only have received a lecture had he not sought to turn it into a debate. For every occasion that Atkinson reached into his pocket, however, there were at least three where he did not.

Even better, he preferred to be entertained by the top-class football on both sides, rather than by the numerous dives with which certain players who have already been named, and others who haven’t, attempted to gain an advantage. That, for me, is the motto of English football: get up and get on with it. Mancini, who already cuts an embattled figure, may have sealed his exit from the English game by screaming at Carlos Tevez to dive after, to the Argentine’s credit, he refused, struggling on despite being given an excellent opportunity to draw a penalty when Patrice Evra ran up his back.

Some may argue that the linesman got the call wrong when Ashley Young finished off van Persies carom off the bar. However, as much as replays suggest he was kept onside by Zabaleta’s calf on the far side of the pitch, it has to be noted that the linesman was on the near side, and that Young and Antonio Valencia combined to screen Zabaleta from his view.

In any case, that hardly detracts from Atkinson’s performance. When Mancini first took over City from Mark Hughes, he did not have the players he desired, and even after he acquired them, he persisted in playing a dull, rearguard action against strong opponents. As the club came into its own last season, he began to open up. Yet, despite that evolution into an attacking philosophy, had Atkinson taken this match by the scruff of the neck early, tempering the aggression of both sides, it is beyond doubt that both Mancini and Ferguson would have become more conservative in their approach, happy under the circumstances to settle for a bore draw. No, this match, these players, and English football deserved a light hand. Martin Atkinson applied it. The result was one of the best matches we are ever likely to see, and I for one am grateful.

This article was contributed by Martin Palazzotto from Strange Bounce.

2 responses to “Referee Report: A look at Martin Atkinson during the Manchester Derby”