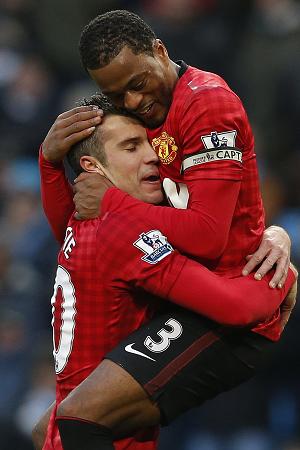 When Robin van Persie left Arsenal during the summer for Manchester United, he came in search of success. That doesn’t happen with a click of a finger because you have to show consistency, something he has done in front of goal this season.

It baffles me to think all Van Persie has won since arriving in England is the FA Cup. That’s eight years spent at Arsenal without a league trophy, yet their fans will try to tell you he left for money. Little do they know he rejected an offer from City worth £300,000 per week because he wanted a move to United more.

Patrice Evra believes Van Persie has what it takes to drive United onto more success. The French left back seems to have found a new friendship after losing Ji-sung Park to QPR a couple of months ago.

“Robin is perfect for Manchester United,” added Evra. “When he scored the hat-trick at Southampton he also missed a penalty. The first thing he said when he came back to the dressing room was that he was really sorry for missing the penalty. That shows the hunger, humility and personality he has to win trophies. He is not just scoring for himself. He really wants the team to win something.”