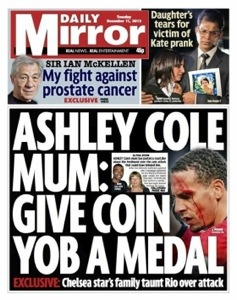 The front page of the Daily Mirror on Wednesday consisted of a jibe aimed towards Rio Ferdinand from Ashley Cole’s mother. She appears to have been thrilled when she heard about Ferdinand being struck in the eye with a coin that came from a City fan.

A chip off the old block some like to call it. Ashley Cole has had his name printed in the papers a number of times for wrong reasons, but who would have guessed scum runs in the family?

His backing of John Terry earlier this summer says it all. Changing statements in a matter of weeks didn’t look too convincing from my point of few. Given his mum’s jibe on Facebook, scumbag-like behaviour seems to have been passed down the family.

Following a City fan splitting Rio with a coin on Sunday, Cole’s brother and mother took to Facebook, with the full report in The Mirror.

His brother Matty posted: “So happy Rio got hit in the face today when he tried to give it kissing his badge!! Straight in the eye!! Made my day.”

His mother Sue replied: “Bloody missed that, ha ha ha. Give the fan that threw it a medal!!!”

Sue responded: “Rio in audience at x factor, wonder if he can see?????”