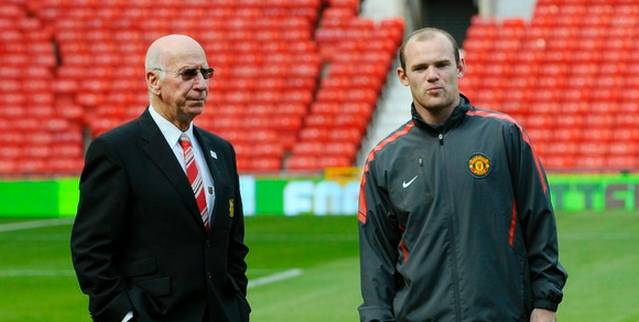 Wayne Rooney became the first Manchester United player to score 10 goals in all competitions against City. The United No 10 also became the sixth player to net 150 Premier League goals after his excellent brace at the Etihad Stadium on Sunday, in a thrilling encounter against their fiercest League title challengers this season and last term.

Rooney moved ahead of United legend Sir Bobby Charlton in derby goals after scoring twice to fire the Reds ahead in this pulsating match, which was fought over in a classic end to end counter attacking battle. Yaya Toure and Pablo Zabaleta pulled goals back for the Citizens to lead to a now normal climax to the, ‘cant take your eyes off the spectacle’ of these table topping encounters. For Robin van Persie to seal three points with a winning adrenalin pumping free kick in the dying embers of this fiery encounter.

While Rooney is on ten Manchester derby goals he has equaled, and will surely overtake City legends Joe Hayes and Francis Lee, who are also attributed with 10 goals a piece in the derby tussles. The 27-year-old has more than sufficient time to surpass his tally of 10. The Evertonian as we know scores in clusters and spasms and thrives on confidence in netting, as do all strikers. This may be the start of another purple patch for the steadily maturing hitman.

Rooney became as a result of his two critical goals against City the sixth player of all the Premier Leagues history to score 150 Premier League goals. Only five others have achieved this spectacular milestone in their career. That list consists of Alan Shearer, our own Andy Cole, Robbie Fowler, Thierry Henry and Frank Lampard.

Wayne went on to say this on his goal scoring feats: “I didn’t know I was top United derby scorer but I am proud of that. It is a great feeling to score against City. There is a lot of passion and pride in Manchester in these games and it has been great for me to score so many. ” Wayne also embraces Robin van Persie’s contribution in noting: ” I practice free-kicks most days with Robin, Ryan Giggs and Ashley Young. He is a fantastic striker of the ball. Before he took it I went over and asked him was he shooting or crossing, so I knew whether to get my man or leave space to shoot. He told me he was shooting and thankfully it went into the bottom corner. ”

Pure theatre and a bitter sweet irony as to the player who cowardly ducked to lamely lift his leg and deflect the ball past a helpless Hart. Two ex Arsenal players, one playing as if he is made for Manchester United and wants to be at United, Nasri contributing nigh on nothing for City. These are the breaks!

It’s all blending sweetly with a united understanding and the harmony building in the Manchester United strike force.

With one of Sir Bobby Charlton’s records fallen to Wayne Rooney’s prowess in front of goal, will his 249 strikes eventually be overcome by Wayne Rooney? With Rooney (188 goals) only recently turned 27 surely over the course of the next three seasons with a target of 20 goals per campaign, Wayne will overtake Jack Rowley (211), Denis Law (237), and Sir Bobby Charlton (249) to be Manchester United’s greatest goal-scorer of all time. To go down in history as a legend himself at United.

**Four Four Two had this to say on Robin van Persie, recently.

The Dutchman has had an astonishing 12 months. The Prem’s deadliest finisher since Alan Shearer, he scored 37 Arsenal goals in 2011 – 12, already has double figures this term for United and won the PFA and the FWA Player of the year.

Four Four Two: “Is there a more consistent Prem poacher? A fourth 20 – goal season in six and career- best domestic haul (27) say not. Deployed deeper this term, he’s just as deadly for United, providing seven assists by the end of October. Did you know ? He’s won Match of the Day’s Goal of the Season award a record three times.”

Wayne Rooney on his chances of making it five titles in 2012/13 said this recently: “I think the signings we’ve made make a big statement. We’ve brought Kagawa and Van Persie to Old Trafford and it’s exciting to be part of the squad at the moment. I think everybody feels the same way you can feel that excitement in the dressing room. There’s a lot of energy there. It’s a great challenge for us to win that title back and we’re all ready for it, we’re all going to fight until the end in order to do that .”

The euphoria surrounding the City defeat is brilliant and makes for happy Reds, but… Lest we forget last season with 6 games to go till the finishing line, United were 8 points ahead of City, and complacency struck with wicked results.