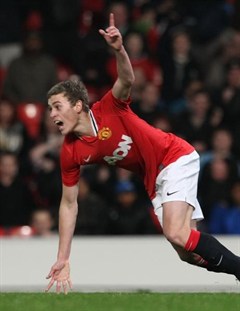 Manchester United’s much fabled youth system since the heady days of the Busby Babes, which will be commemorated in February by Dale, not here and now, is renowned for producing fantastic young players.

The Class of 92 are one of the finest group of players most recently, along with home grown talent such as Tom Cleverley and Danny Welbeck of the present era. All fully fledged International team and still mere youths in their career development.

Are Manchester United about to unleash another of the fabled products of the famed Academy system, James Wilson? Wilson, who has just turned 17, has quietly announced himself in scoring goals. His star is surely on the ascendancy while he matures, works hard and grows to make the grade at United, ultimately the first team.

United have a fantastic array of attacking strength in their spear – head attackers, Van Persie, Rooney, Hernandez and Danny Welbeck sufficient to put fear into most defensive back lines in Europe. There will be no easy route for any of the younger players to make the breakthrough into the first team. James Wilson has his work cut out for him, but he is displaying many of the traits as a player to keep a careful eye on as his career progresses. As noted its not easy at Manchester United to make the grade that is required, as we saw with Dimitar Berbatov sadly having to be sold to Fulham. Fredrico Macheda struggling to find his early United career promise, that has stalled at Old Trafford, Sampdoria and Queens Park Rangers for a range of reasons. Another obstacle in James Wilson’s path to the top team strikers berth is Will Keane, an England under-21 International. There is no reason to give up on the hope for Will Keane as he recuperates from a serious cruciate ligament injury. James Wilson himself has also had to recover from a significant career threatening injury at a young age, which ends a lot of players careers. Wilson overcame this.

However as Will Keane rehabilitates back to full fitness the youngster will be aware of James Wilson’s impact in his short period at Old Trafford. As will Sir Alex Ferguson as Paul McGuinness keeps him up date on all the younger players development. Wilson recently scored five against Newcastle on 22 September – the under 18s destroyed the Geordies 7-1 away from home. Again in the north east against Sunderland on 24 November, Wilson netted twice as United beat the Black Cats 4-0. He also bagged another two goals against under 18 Premier League Group 2 table toppers Southampton at home as United beat the Saints 4-2. As Southampton had won the group and United finishing second, they both qualified for the Elite Group stage of the competition. This is not to imply James Wilson is the key component of the under 18s success so far this season. Adnan Januzaj, Matts Daehli and Jack Barmby are all currently bubbling below the likelihood of being promoted to the Under 21s.

However, as we know Ferguson has an attraction for players who score goals. James Wilson seems to fit the bill.

At other clubs they allow the youngsters to express themselves in the first team, if they are good enough. Prime examples are Raheem Sterling at Anfield and Alex Oxlade-Chamberlain at the Emirates, who both have grown when moved up to their first team. Will we see James Wilson soon in the the under 21s team or even the bench for big match experience in the less important matches ahead of United? We know Sir Alex is cautious when pushing younger players forward. Paul Pogba, Ravel Morrison and Ezekiel Fryers as recent examples, who did not have patience and the mental capability to be guided, in their United careers. Hopefully Wilson proves to be a a different kettle of fish.

To add to the humble unsung youngsters repertoire he is a natural left winger, as well as a spear-head attacker, similar to Danny Welbeck. He can only benefit by learning from mature International professionals at Carrington.

However, we first saw James Wilson when he was 15 years of age in the Under 18s. He made his under 18s debut against Everton and scored. In the under 18s FA Youth Cup Wilson also scored the only United goal at the Theatre Of Dreams against Chelsea last season, as the west London outfit beat the Reds 2-1 in the first leg of the tie.

Last season both United and Burnley reached the semi-finals. Will United eliminate the Clarets tonight to move onto the fourth round of the FA Youth Cup. More importantly, will the under 18s go on to win the FA Youth Cup for a record breaking 11th occasion. Wresting  the title back from Chelsea, the current holders who won it for the fourth occasion last season.

What a fantastic boost it would be ahead of the derby at the Etihad on Sunday for the young Reds to win tonight and progress in the FA Youth Cup. For a rising star James Wilson to score at the Stretford End, dreams are made of this.