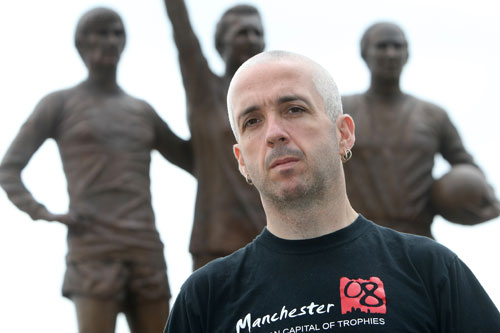 Pete Boyle, known for his football chants, has recently launched his tenth album full of Manchester United songs. He’s decided to mark the occasion by giving Stretty News readers the chance to win his latest CD, ‘Cisterns of Merci’.

If you’re not familiar with him, Pete was born in Withington and raised in Altrincham. Being a United supporter all his life, Boyle attended his first game in 1974 and has been a regular at Old Trafford since then, attending all away matches since 1982 also.

Most of the chants that are sung on the United terraces are composed by Pete. He believes that United has the best range of songs and the most original, in the whole of the Premier League. His favourite player is Eric, with Jimmy Greenoff running a close second.

The latest album is called Cisterns of Merci and it includes songs for RvP, Rooney, Little Pea, Tony V and many others. Despite costing £13 each, Pete has donated five albums for Stretty News to giveaway. To be within a chance of winning, all you have to do is name Pete Boyle’s first ever album.

You must ensure that you are posting comments from a valid e-mail address as this is how the winner will be contacted.