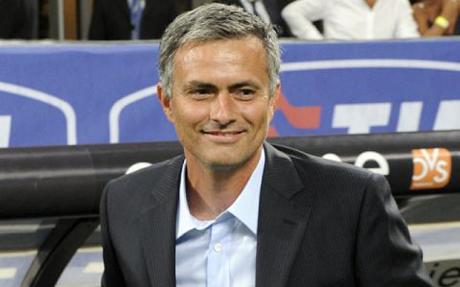 Sir Alex Ferguson has said Jose Mourinho would be capable of replacing him at Old Trafford when he decides to call it a day and retire from football management.

‘Who will replace Fergie at United?’ is a question that has been asked over and over in recent years. Jose Mourinho is already a favourite but Pep Guardiola would have something to say about that. The pair have both won the Champions League, but Mourinho has been around longer and won the Premier League twice.

When asked about it today, Ferguson refused to give a direct answer but claimed the current Real Madrid manager has the qualities that would be needed to take the biggest job in football. It’s a title I always thought Mourinho would be interested in, so I can guarantee you he would come with open arms.

Mourinho has already won 21 trophies from 10 years in the dugout but he’s far from finished. Jose shares a similar winning mentality to Ferguson which, of course, adds to his capableness.

“I would never think a guy who hasn’t played a game could be a top coach, but then you’ve got to look at his personality, I think his personality does it,” Ferguson added.

“He’s got a marvellous, strong personality and I think that bridges that gap.

“That’s incredible (his trophy haul). How old is he now? Fiftieth year. So he is 20 years behind me. At the same rate he is going to add another 42 trophies. At the current rate, (that is) amazing isn’t it?”

Since leaving England, Mourinho has made no secret of his desire to return. This has led to endless speculation with clubs such as United, City and even Liverpool… Also, one of his many ambitions is to win the Champions League with an English club after failing with Chelsea.

Interestingly enough, Miguel Delaney from the Independent wrote about the future without Fergie, last week. Both Jose Mourinho and Pep Guardiola were brought up in a conversation between David Gill and Joel Glazer. However, it is known that Mourinho met Ferguson in Manchester for lunch two weeks ago before Madrid took on City in the Champions League.

During September, a Manchester United delegation of Ferguson, chief executive David Gill and Joel Glazer met the Catalan in New York. According to very well-placed Old Trafford sources, the main topic of discussion was the future. Apparently, the job after Ferguson’s is “Guardiola’s to refuse”. For his part, the former Barca boss is understood to be hugely interested. United want him above all, and Guardiola would certainly put their offer above most others.

Mourinho, however, supposedly got wind of this and recently made it known to United that he would still take the Old Trafford job ahead of City. It’d be interesting to see how he’d take his nemesis getting the job he has courted for so long, and may even make an even greater rivalry. If it was to hypothetically happen soon, too, would that mean Mourinho staying at Real Madrid or looking elsewhere?

Even Ferguson, though, is not immune to all of this. With the Scot supposedly determined to ensure his succession is handled perfectly in order to safeguard his club and legacy, does he risk losing a preferred choice by picking the wrong time to go?

While no-one would begrudge the current United manager wishing to finally fulfil all his professional goals in the short-term, how would he feel seeing someone he clearly values so highly at Manchester City in the long-term?

Read the article in full here at the Eircom Sports Hub.