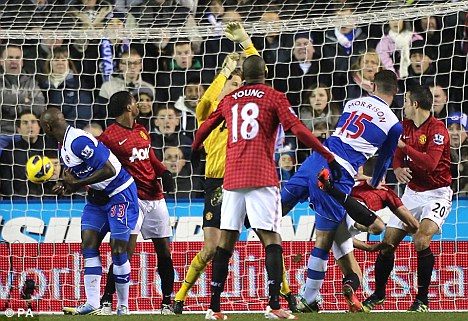 As much as Sir Alex Ferguson’s post-match comments that he would be forced to play himself at the weekend against Manchester City, following another defensive nightmare against Reading to add to a catalogue of horror shows, were tongue and cheek it was blatantly obvious that there was a serious undertone to the Scot’s dry wit. It was more a major warning to the players, rather than the start of Ferguson’s stand-up career, that their current defending is not acceptable and certainly not the Manchester United standard.

It speaks volumes that in the 2008-9 season we only shipped 24 goals all season, 15 matches into the current campaign and we have leaked 21 goals. Hardly water-tight is it?

After Reading opened the scoring on Saturday against our brittle defence, that was the tenth time already this season that we have conceded first in a league match this season, and fourteen times in all competitions. Those ten times represent a bigger total than bottom of the table QPR. This is astonishing and indicates that our back-line has not been good enough. Collective solidarity and tightness as a unit are fundamental ingredients that go a long way to ensuring a team is successful. We have been extremely fortunate this year that our array of world-class talent in the attacking third of the pitch has rescued us and bailed us out of some sticky situations.

That said, Old Trafford has not always been the fortress that we long for it to be this season. Fulham, Tottenham, Stoke and even lowly QPR have all cracked the code and opened the scoring in matches at the Theatre of Dreams. More often that not at home this has not been a major deal, we have managed to overcome this curse bar Tottenham, it is just a source of frustration for the supporters who expect us to win comfortably at home, with the emphasis on us to attack, it shouldn’t really be the other way round.

The truth of the matter is that every time Reading swung in a delivery whether it was from a free-kick or a corner, they looked seriously menacing, looking like they would score from every set-piece and we looked unprecedentedly shaky, something rather abnormal during the Ferguson era, we normally excel at defending set-pieces, we have a lot of organisers in our squad and we practise a lot on the training ground, it is a safe bet that the players will probably be sick of this drill on the eve of the first derby match of the season, but if we replicate those defensive frailties against the noisy neighbours then we could easily be looking at another hiding. Something we cannot allow to happen.

Of course, much of our frail state has been down to another reasonably lengthy absence of our captain Nemanja Vidic. Despite the experienced Rio Ferdinand still playing an important role in the heart of our defence, we visibly still lack some leadership and organisation back there. Last week’s victory over West Ham, in which was a rare clean sheet, defenders Rafael da Silva, Jonny Evans and Chris Smalling were all singled out for special praise by the manager for dealing with battering ram Andy Carroll expertly. What a difference a week makes though, Rafael was substituted for tactical reasons after a half an hour from hell on Saturday albeit his first markedly poor and rash performance of the season, his hissy fit and refusal to acknowledge his manager’s hand capped off a nightmare day at the office for the Brazilian. Evans was culpable for the first goal, a very weak header fell straight to Reading’s attacker to open the scoring, he then left Adam Le Fondre open to head home unmarked, a 5 foot 9 striker scoring in the six yard box with his head should not be happening.

On the eve of the Reading match, the manager claimed that the second episode of our goalkeeping rotation series was justified. Saying about Anders Lindegaard, “They’re (him and David De Gea) both good goalkeepers, I’m going with Anders at the moment because he is not letting us down”. The general consensus is that Lindegaard possesses the more commanding figure and frame than our young Spanish keeper De Gea, thus instilling more confidence to our back-line. On Saturday, Lindegaard made rabbits in front of headlights look like they had fewer nerves, you’d be forgiven for thinking that the Dane had concrete slabs in his boots given his reluctance to claim crosses and set-pieces that were evidently troubling our defence. Two of their goals from corners were down to shoddy marking and a non-existent commanding presence from our goalkeeper. He was too preoccupied with their striker Jason Roberts who was standing on his toes and we made him look like Didier Drogba, the alarming truth.

It is stating the obvious that we need to stop the habit of conceding first in a game and needing a bailout from our attackers. If we make it the fifteenth time we concede on Sunday then it is unlikely we could wrestle back the game given the quality of their attacking play. If we defend half as shockingly as we did on Saturday then it could feasibly be a cricket score. It is a good job we have the 3 point cushion at the top but as we know all too well, the two derby results last year went a long way to deciding the destination of the Title, you suspect it will be a similar story this season too. This means it is important we are not on the receiving end of another crushing this year akin to last year.

It is of paramount importance our defence is an impenetrable force, starting Sunday, there is no better place to stop the rot than at the Emptyhad.