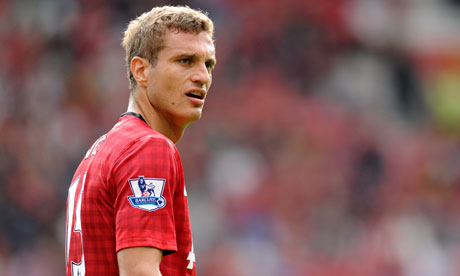 Manchester United skipper Nemanja Vidic has returned to full training and is supposedly available for first-team involvement within a fortnight.

The Serb has been absent since late September after undergoing an operation on the same knee that had him sat on the sidelines for most of last season. Questions have been asked whether he will be injury riddled for the rest of his career which obviously lead to speculation linking United to a number of defenders around Europe.

Sir Alex Ferguson understands the trouble of bringing players back into the squad when they’re not fully fit, so he won’t be doing it with Vidic again. The 31-year-old has experienced no setbacks since returning to training and has impressed the manager and staff with his progress.

However, there has been one setback. The club initially thought Vidic would return late November, but Ferguson then said he didn’t expect a return till late December. The Christmas period often promises a bundle of fixtures, home and away, coming thick and fast. Our back four has proved troublesome this season, therefore having Vidic back will be a huge boost for the second half of the season.

It is important to point out that there is no desire amongst the medial staff at United to rush Vidic back. There’s too much of a risk involved and as a result, it would really surprise me if he made his comeback in next Wednesday’s Champions League tie against Cluj. In the long run, it’s not worth it.

2 responses to “Vidic back in full training”