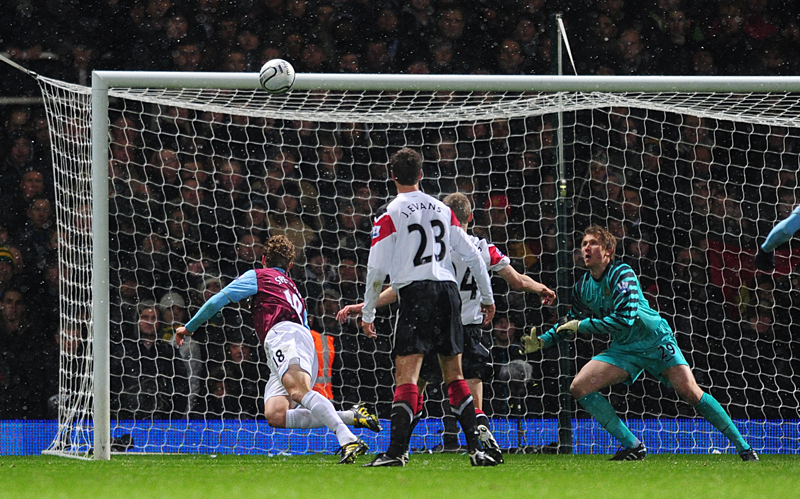 Manchester United have won  five  and lost none of the eight games when the Chester based  referee Mike Jones has officiated. While West Ham have lost one of the five games he has been the referee (W3,D1,L1).

Team News
Both Paul Scholes and Mark Noble are suspended having incurred a 5th yellow card in their previous outings against QPR and Tottenham Hotspur.

Sam Allardyce had this to say ahead of the trip to Old Trafford, “This is a game for the lads to enjoy because there is no real pressure on them other than they put on themselves to perform well on one of the biggest stages in world football. It is important for players to go out on that stage and produce what they know they can because even if we lose you can still return home satisfied you have done your absolute best. We will still be disappointed of course but hopefully our best will see us pick up a positive result. Manchester United have leaked more goals than usual this season and their defence has not shown the quality it has in the past. The trouble is that at the other end they cannot stop scoring goals. We need to get our defensive unit on song and play as a team in and out of possession if we do that you never know.”

Sir Alex Ferguson had this to say on the West Ham manager. “Big Sam went to Upton Park a year and a bit ago and the cynics said he’s not a West Ham manager as he doesn’t play football. What was his mandate? To get them up into the Premier League as quickly as possible and he got them up within a year. Tell me someone else who could’ve done that?”

United are just where they want to be, top of the league but achieving the hard way. Conceding the first goal in nine of the 13 league matches to date but recovering to comeback and win in six of them.

West Ham have won just one of their five matches against teams in the top half of the league this season, against Fulham. However a warning to Manchester United, the Hammers have won five of the six league games in which they have scored first this season.

Ten of United’s league goals this term have been from headers, more than any other team in the Premier League.

The match tonight is on the eve of Ryan Giggs 39th birthday. Should the Welshman make an appearance it will be his 920th in his illustrious, single club career, helping in winning for Manchester United 12 Premier League titles, two UEFA  Champions  League Cups, four FA Cups and one FIFA World Club Cup.

Under the microscope striker Andy Carroll ended his 1,062 – minute  Premier League goal free spell with a strike against Tottenham Hotspurs a plus point for the Hammers from their loss to the north London outfit. Allardyce will be hoping the £35 million Geordie on loan from liverpool now starts scoring on a regular basis.

Wayne Rooney unsurprisingly gives his England teammate Carroll his vote of confidence. “Andy Carroll  is a handful. I am sure if you ask any defender, they find it difficult to play against someone like that who is good in the air and on the floor. He is physical and makes it hard for opponents.That type of player doesn’t always get all the goals but they can cause trouble up front and create problems.” Carroll has indeed won 102 of his 157 Ariel challenges, an impressive 11.3 per game.

The last game in which Manchester United met West Ham the comeback kings had to recover from being  2-0 down. True to current form going onto win the match 4-2.

United sit top of the Premier League one point ahead of the pack after a flat lacklustre performance against Queens Park Rangers in their last outing. There can be no room for complacency tonight against 8th placed West Ham, who are  themselves fighting to attain  a Europa League spot in the league. Chelsea will in all likely hood beat Fulham at Stamford Bridge  and as Manchester City travel to Wigan where they also will be determined to leave with three points, there should be no slip ups from United tonight.