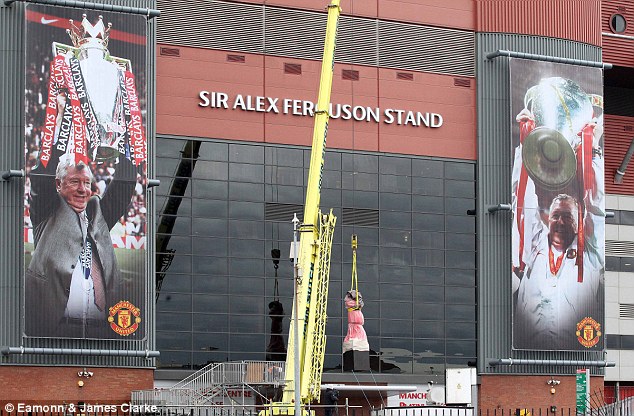 Manchester United will unveil the statue of Sir Alex Ferguson tomorrow afternoon (Friday, 2:00pm). If you are planning on attending the event outside Old Trafford, we have collected some of the details.

In September United were granted planning permission to erect the statue outside the Sir Alex Ferguson Stand. Fergie joins a legendary list which consists of Matt Busby, Denis Law, George Best and Bobby Charlton, having a statue placed outside the ground.

The club announced last year they had commissioned Philip Jackson to design the tribute. Jackson has previously worked on statues of Mozart in London’s Belgravia and Empress Elisabeth of Austria in Geneva.

Location: The unveiling ceremony will take place outside the Sir Alex Ferguson Stand – the statue itself will be placed on a canopy above the main entrance to this stand (Tour/Museum entrance). The fan viewing area will be set up in the car park adjacent to this area (N1). This area will not be under cover so please bring suitable clothing in case of inclement weather.

Schedule: The unveiling ceremony will commence at 2pm and will last approximately 30 minutes. A short time after the ceremony ends, fans will be invited to view the new Sir Alex Ferguson-themed installations and artwork in the lower concourse (approximately 3:30pm).

Parking: Parking will be available in W2 outside the ticket office.

Food and drink: Catering outlets will be open in the fan viewing area. The Red Café will also be open all day.

Museum and Tour: The museum is open from 9.30am until 5pm and tours will operate from 9.40am until 4.30pm. Due to the unveiling event, the normal museum and tour entrance will not be in use. There will be signage and staff in place to direct visitors through the temporary entrance at NX16. There will be some slight disruption to the tour route as we are not able to use the concourse in the Sir Alex Ferguson Stand due to this event.