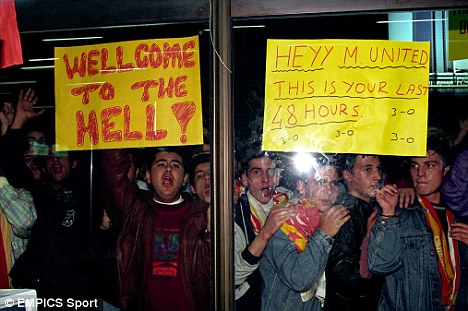 Galatasaray fans welcomed Manchester United to Turkey in hostile fashion tonight after the plane landed in Istanbul. The Turkish support are reported to have hurled fireworks and flares at the entrance, forcing police to guard the squad and persuade them to find another exit.

United have two games remaining in the group stages of the Champions League, but have already qualified for the knockout stages in unconvincing form. Sir Alex Ferguson promised today that he would play some of his youngsters in order to grant them experience in a tie which promises hostile atmosphere.

Phil Jones is said to be making a comeback tomorrow night giving Fergie a boost in options at defence – by far our most troublesome area on the pitch this season, surpassing complaints regarding midfield.

Turkish news outlet Haber, who recorded the video below, are reporting that the Reds left via an alternative exit. I’ve no doubt these supporters will be in the stands tomorrow night giving more.