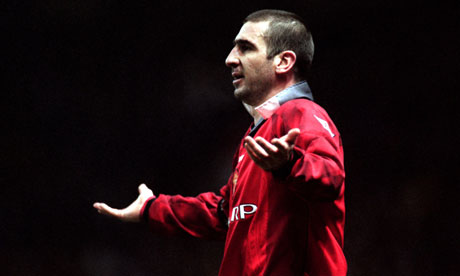 Eric Cantona has admitted he would like to coach Manchester United at some point in the future. After retiring and leaving Old Trafford in 1997, it sounds like he’s itching to come back.

The former Manchester United centre forward does not expect that to happen anytime soon because of Fergie’s dedication to the job. Either way, I’m not sure if he’s exactly suitable for the position. I’ve never seen Cantona as a manager, but that obviously doesn’t take anything away from what he did at United. Experience will play a part when the club picks the successor of Ferguson.

In terms of coaching experience, Eric Cantona spent four years with France’s national beach football team and he is currently director of football at the New York Cosmos. At United as a player, however, Cantona won four Premier League titles in five years after joining from Leeds in 1992.

“I would say, ‘United is special, of course I would do it’, said Cantona in the Daily Mirror. “I love to watch United winning things and I want Ferguson to be manager forever.”