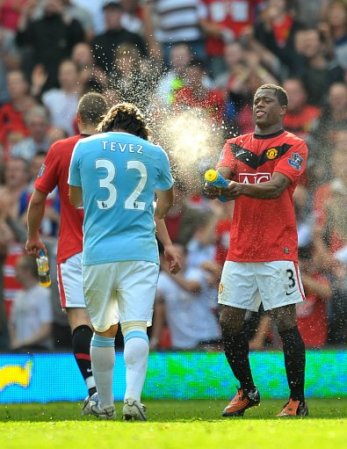 Ahead of the international friendlies this week, Patrice Evra has spoken out about the rivalry between Manchester United and City.

Since arriving in Manchester, Evra has been a favourite amongst the fans not only because of his threat at left back but his knowledge and respect towards the club. He claims City’s Premier League title win does not change the fact that United are superior to them.

The French international has come in for a lot of stick in recent years over a dip in form. Evra doesn’t get up and down the line liked he used to, nor is the positional side to his game at the standard it once was.

Then again, he is 31-years-old. There comes a time in a footballers career when everything appears much more difficult. Sir Alex Ferguson was warned during the summer, after sending Fabio to QPR on loan, to sign a left back to compete with Evra and hopefully act as a replacement when he hangs his boots up. When negotiations over Leighton Baines showed no signs of improvement, United looked elsewhere and brought Alexander Buttner in. Most players Evra’s age couldn’t dream of playing 35+ games a season.

“I don’t know if we could talk about rivalry between both Manchester clubs, because we have always been superior to Manchester City,” said Evra. “And even if they won the national title last season, that won’t change anything.”