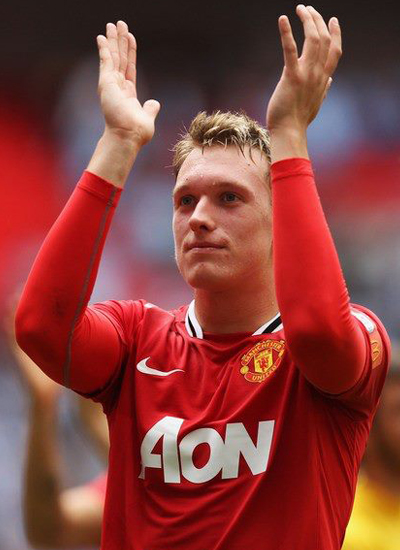 The year 2011 was one of transition for our great football club. Priceless experience had been lost in the shape of Van der Sar, Brown, O’Shea, Scholes (prematurely) and before that Gary Neville. With his eye firmly set on creating a new Manchester United dynasty, the manager, as in previous Manchester United sides, entrusted youth to step up to the plate with two of the club’s academy prospects Tom Cleverley and Danny Welbeck enjoying breakthrough seasons. But it was a big-money signing from Blackburn Rovers that threatened to steal the show.

In 2009, Phil Jones was trying to forge a career for himself, by captaining Blackburn’s reserve-team. His rise to the top was certainly not as meteoric as fellow fledgling defender Chris Smalling, but with the other English top dogs vying for Jones’ signature, the manager probably had to act quicker than expected, and forced through a deal to bring the future-tipped England captain to Manchester.

Jones brought to the club traits that were originally illustrated at Ewood Park. He made his league debut against the physical specimen of Didier Drogba. Jones was not starstruck or in awe of his opponent, he gave the Ivorian a run for his money and played him at his own game, crunching into tackles and contesting the aerial battle. His sterling opening appearance for Rovers was rewarded with the man of the match award and already drew comparisons to stalwarts of the game. He demonstrated this fearless approach on debut for United against Tottenham, injuries to Rio and Nemanja meant he played in his then seemingly niche position of centre-back and hugely impressed there, combating Gareth Bale’s wheels in the process.

As is commonplace with United, we fall foul to the injury curse. There was a space at right-back after Rafael fell victim to said injury demon. Jones, once again, excelled in the role he was asked to play. For much of the first half of the season, Jones was pressed into service there and his combinations and linkups with Antonio Valencia down the right contributed to a fair amount of our goals last season. Jones was again praised by experts of the game, he was compared to Franco Baresi by then England manager Fabio Capello, and Sir Bobby Charlton linked the youngster to Busby Babe Duncan Edwards, United followers for many a year have said that Edwards was arguably the best ever talent to come through our illustrious academy system. When put like this, one can easily see how much Jones was appreciated by the United faithful. Being compared to such a great as Edwards was must have been a serious confidence boost to the lad, especially as there was no bedding in period for Jones, he was thrown in at the deep end and he produced.

Unfortunately, injuries is a key theme of this piece. Upon writing, Jones is recovering from a long-term knee injury. One abiding obstacle we failed to overcome last season was keeping players clear of injury for a sustained period of time. It meant that there was hardly any room for rotation or opportunity for key players to rest. We suffered the most injuries last season in the most critical area of the pitch, the centre of midfield. Injuries to Anderson, Fletcher, Cleverley and the retirement of Scholes meant there was a dearth of players in the engine room when we needed them most. The manager experimented with Jones in there, and guess what? He excelled again. During the usual hectic nature of the festive football period, Jones was entrusted to provide energy and be a threatening box-to-box player. Incidentally, he scored his professional goal from midfield for United in a 1-0 away success against Aston Villa, and went on to be outstanding in later fixtures against Wolves and QPR in midfield. Ok, they are hardly the most stringent of tests, but you can only beat what is in front of you and Jones showed he had the potential to be a very dynamic central midfielder. This run of terrific form led to Capello selecting Jones in centre midfield for his England debut.

It was a huge vote of confidence and amount of trust placed upon Jones by the manager to select him in 3 different positions in his opening campaign with us. But there is always a certain amount of risk when you do not nail down a position early on in your career, as the next two examples will demonstrate.

Phil Neville. Generally considered to be the more naturally talented Neville, Gary wrote in his autobiography “teams would ask for me, they’d beg to have Phillip”. Phil played in a number of positions for us, both full-back positions and occasionally was asked to fill in central-midfield, one game that sticks in the mind is against Arsenal, with Phil showing bite, desire and heart to upset Arsenal’s fluid rhythm and get under the noses of the opposition, he particularly annoyed Patrick Vieira much to our delight. So despite being the more talented sibling, why was Phil’s United career shorter than his brother’s? Phil, unlike Gary, did not have a sole position, so he would not consistently make the starting lineup. Gary made the right-back position his own and has thus far been our best ever in that position. Phil’s desire to play week in week out meant a move to Everton, where incidentally he still plays a number of positions.

John O’Shea. He literally played in every position during his spell with United. He was not the most blessed footballer but he was always a vital member of various Ferguson teams due to his adaptability and willingness to play anywhere as long as it meant getting a starting berth. We will be thankful forever to Sheasy for scoring some crucial goals over the years (Anfield, Arsenal in the Champions League), but his situation was similar to that of Phil Neville’s. Handy squad player but needed games elsewhere at his age.

Both Neville and O’Shea are unlikely to be on many peoples’ “United Greatest XI” sheet but they certainly played their part over the years. They fell victim to the “Jack of all trades, master of none” tag, for our and Jones’ sake it is of paramount importance that Jones avoids this misfortune.

It is understandable that Jones’ early-season mesmerisation would not last the whole course of a season. Injury and loss of form disrupted Jones’ second-half to the season, many were even questioning whether his initial promise was merely a flash in the pan.

Rafael has seemingly come of age in a United shirt, meaning a potential slot at right-back for Jones could be limited, incidentally where Jones first flourished for us. Two slots that are definitely there for the taking appear at centre-back, where Jones plied his trade for the majority of his brief Blackburn career, and in central-midfield, where he showed promise last Christmas. The inevitably imminent retirements of United legends Paul Scholes and Ryan Giggs will clear the way for Jones to stake a claim to hold down a position. Arguably, the same could be said for his chances at centre-back. It is not clear how long Rio Ferdinand intends to play for or if he is required by the manager, and Nemanja Vidic has become increasingly injury-prone and is not getting any younger. Maybe it would be important for Chris Smalling’s development also if he was allowed to become a mainstay at centre-back, leaving Jones to have a free swing in midfield.

Jones has all the traits required to make it as a midfielder. He is strong, quick, aggressive, can pick a pass and his energy means he can be a genuine threat as a box-to-box player, something we have not had since Roy Keane. One thing against him becoming our permanent centre-back is height. Yes, he is not small at 5 foot 11, but last year he was bullied at St.James’ Park, a miserable night ensued and he scored an own-goal. Height is not always a necessity at centre-back, look at the success Fabio Cannavaro enjoyed during his career, but with a serious emphasis on big, bruising centre-forwards in the Premier League, Jones’ height is a slight deterrent, but otherwise all the qualities are there.

If the manager ultimately sees Jones as a midfielder, then the prospect of this youthful and energetic midfield consisting of Kagawa, Jones, Cleverley and Anderson would give us much needed legs in the middle of the pitch. With qualification from the Champions League group stage already confirmed, Jones feasibly has two chances to regain fitness for the bread and butter of Premier League football.

Jones has already recognised that he has been employed in an array of positions for the club, but he says it is not that significant that he has not yet nailed down a permanent slot, “”I enjoy playing anywhere. I enjoy playing football, so wherever I am asked to play I will play. If the manager asks me to play right-back, centre-back or midfield, I will go and do a job there.”I don’t think it really matters at the moment that I am cementing a spot in a certain position because I am still young. Hopefully, as my career progresses that will happen.”

Most of the United faithful will echo Jones’ sentiments, the “utility man” tag is harsh given his talents, let’s hope he banishes this tag.