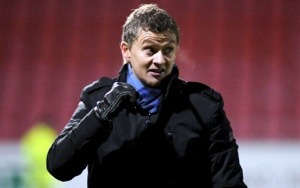 Expectations were high when Ole Gunnar Solskjær returned to Molde after a 15-year exile in Manchester, and he provided the goods in his first year in charge having helped Molde achieve their first league title 100 years after being founded. Today, he did it again for the second season in a row.

Molde were crowned champions of Norway with a game to spare as substitute Daniel Chukwu’s header gave them a 1-0 victory over Honefoss. Stromsgodset’s shock 2-1 defeat to Sandnes Ulf played it into their hands also.

There’s no doubt that Solskjær’s winning formula has been strongly infused by his United legacy. Former United reserve, Wolff Eikrem has been the heartbeat of the teams attacking play, and has adjusted to senior football brilliantly since last year.

When Solskjær first took charge at Molde, he inherited a squad with no real star players, and no prolific goals scorers. Even Wolff Eikrem hasn’t been among the league’s best players. So there’s little doubt Solskjær’s done a fantastic job at the club delivering consecutive titles.