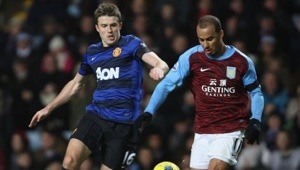 Manchester United travel to Villa Park today facing a side that haven’t started the season in adequate fashion, having only picked up 9 points in 10 games. After an unconvincing win over Braga midweek, Sir Alex Ferguson will want his side to put the game to bed early in an attractive manner.

Conceding goals early has become a habit this season for the Reds, so Fergie will make sure his back four put in a solid performance. Jonny Evans remains doubtful meaning a second start for Chris Smalling in the space of a week looks likely. Rio Ferdinand, on the other hand, is almost a definite starter. The goalkeeping situation looks to have quenched a bit with David de Gea deservedly getting his name ahead of Anders Lindegaard on the teamsheet.

Your guess is as good as mine when it comes to our layout in midfield. Although, I can see Fergie going with a diamond shape formation again. Having Shinji Kagawa absent due to injury, Ashley Young may offer something in a formation often criticized for its lack of width, as I am sure he would love to get one over his former club. Paul Scholes has been rested a lot lately, so a start for him wouldn’t surprise me either.

Ferguson has frequently made comments about having a selection headache up front since Robin van Persie’s arrival. The Dutch striker introduced himself brilliantly by scoring a number of crucial goals for the Reds, including one against his former club Arsenal last weekend. Danny Welbeck has fell down the pecking order with Javier Hernandez rushing into form, picking up Player of the Month at the club for October.

I have no doubt that after a poor start to the season, Villa will be up for this one. Saying that, they have won just 1 of their previous 33 league fixtures against United, making it the most one-sided fixture in Premier League history.

In terms of a scoreline prediction, I don’t like giving them. Goals will be scored but hopefully the back four can protect David de Gea better and award themselves with a clean sheet.