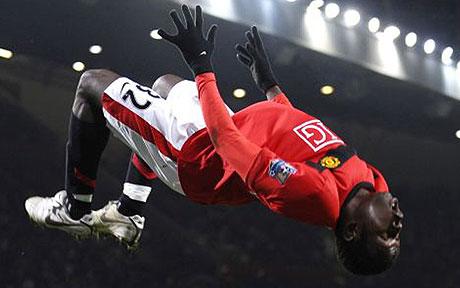 Mame Biram Diouf’s time at Manchester United won’t make its way into the club’s highlighted history. The Senegalese striker made just 9 appearances in which he scored 1 goal against Burnley.

The majority of his days in Red were spent playing for the reserves. Fans got the immediate impression from Diouf that he wasn’t going to make it into our first time, but he still worked hard which is something we must respect.

He left United for Hannover last season and has gone on to score 15 goals in 24 appearances for the German side, who are currently positioned sixth in the Bundesliga. However before joining United from Molde, Diouf said “playing for Manchester has always been a dream of mine ever since I was a small boy, I hope that when I move in January, I will have a big impact, I am confident of playing very well”.

Since his move to Hannover, Diouf has had nothing but good to say about Manchester United. He understands that he had to leave for the sake of his career. After all, he’s among many that later recognise that they aren’t good enough for the top level.

“Manchester United is a great club and I have enjoyed being a player of the club,” Diouf said. “But when at such a big club like United you need someone that fully believes in your skills. It’s useless just to be one more good player. It is a fact I wanted to move on. I did not want to have another loan spell at another club.”