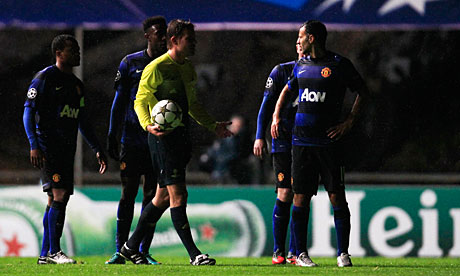 From the team sheet we can see that Ferguson planned to rest a couple of players tonight. Valencia drops back to give Rafael a night off which some might say slightly weakens the defence with the Ecuadorian not being a natural right back, but I’ve got to say I think it’s a good choice giving the role to a player that has experience  in Europe even if they don’t naturally play that far back.

The return of Chris Smalling is positive for the squad with the busy Christmas/new year period coming up. United need players to cover defensive positions with all the injuries we’ve suffered.

Across the middle Giggs, Nani and Anderson came in for three different reasons. Giggs for his experience, Anderson on merit of his performance against Chelsea last Wednesday, and Nani to prove himself.

Hernandez and Welbeck fill the void of having Van Persie on the bench with Rooney able to drop back to create play before advancing forward.

A strong bench gave United a look that they have travelled to Portugal to do the business tonight. Many predicted Ferguson would settle for a point but Braga don’t have the most consistent form in Europe, so I felt we needed to take advantage.

The first twenty minutes went by without much from either side apart from keeping the ball in the middle of the park and a lack of clinical passing on the attack to give that finished article of a goal.

The period from then on saw a few opportunities that were easily avoidable from the United defence, giving Braga a slight bit of pressure that we dealt with in due course leading to a good spell on possession where the only way of attack seemed to be trying to play in Hernandez from over the top.

Before half time, Smalling received a yellow card meaning he had to be cautious with his tackles for the next 50 minutes.

Half time arrives to hold the stalemate for 15 minutes. Highlights of the first half can be written on a stamp. So swiftly onto what improvements United can make in the coming 45 minutes. Personally think upping the pace could offer the opening of Braga’s defence, quicker attacks and some direct movement off the ball will naturally provide United the space that Braga seem not to be giving away in the final third.

Some stats from the first half to prove what we already know. It’s been boring “insert your own *yawns* here.”

Three minutes back from the restart and United concede a penalty which was very weak. The Braga striker just ran into Evans. Alan Osório da Costa Silva dispatched the penalty into the top left corner.

United have it to do now. This will wake us up and force the lads to push on for the equaliser.

Now this is a strange situation… The stadium lights have gone on one side of the ground. The match stops for ten minutes as both teams are asked to return to the changing rooms as they try to restore the power. The Red Army belt out “We’re Man United, we’ll play in the dark” from the away end.

Play resumes on the 57th minute before Ferdinand comes on to replace Evans to hopefully strengthen the defence.

Is this Robin van Persie to the rescue as he comes on to replace Welbeck. Tactically, this could be a masterstroke from Fergie as Welbeck hasn’t really been in the game at all apart from defending. Also seems to bring United into the 4-4-2 formation with Rooney going out on the left as we begin to spread the ball around more on both wings.

As the 70th minute comes up United look brighter but Braga seem dangerous when United give possession away.

Nani is replaced by Rafeal and receives applause from both sets of supporters. Valencia returned to his wing role and United began to exploit Braga right up to the byline.

From the middle of nowhere, even in this mine it really was, Van Persie scores. Starts with a quickly taken free kick which is played out towards RvP, who makes most of the keeper committing a howler by thinking he’ll get to it first to realise that he’s left himself in ‘no man’s land’ as the Dutch striker slots home. Game on with ten mins remaining.

Penalty on the 84th minute and after a long delay by the referee who had his mind changed by an official behind the goal. Superb ball by Giggs over the top to pick out Hernandez inside the box before his shot is deflected into the path of Rooney, who was taken down before he got a shot away.

Rooney scores. Thank god with his recent record it was a pleasure to see him slot his penalty into the top right corner of the goal.

Stoppage time comes with a goal from Hernandez to round the night off. Though we all screamed bury it as he played around with it. It all started off from a break into the box from Valencia who squared it to Rooney coming in before flicking it onto Hernandez. This left Hernandez to scramble around the keeper before hitting a defender on the line to which he poked the ball, whilst on the floor, into the roof of the net.

United glad fully saw off the remaining 30 seconds of stoppage time before the referee blew the final whistle.

That was typical of United to leave it late. We never take the easy route.

The squad looked as if it was there for 3 points and it delivered even if it took till after the lights came back on to spark United into life.