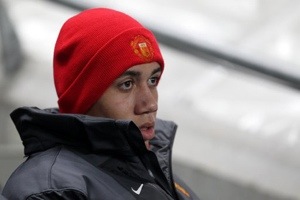 Sir Alex Ferguson has claimed Chris Smalling is set to make his first appearance of the season in Wednesday night’s Champions League clash with Braga. Manchester United have had to use Michael Carrick at centre back a number of times this season due to limited options.

Unfortunately, the limited options dilemma was caused by injuries. United were without Nemanja Vidic for half the season last year but the same injury has occurred again, so the Serbian is expected to be out until December. Rio Ferdinand and Jonny Evans haven’t had the easiest of starts alongside each other but perhaps the introduction of Chris Smalling may shape things up better.

Smalling was included in the squad travelling to the Estadio AXA after spending this term on the sidelines having broke his metatarsal. A quick progression in his rehabilitation at training has made his recovery faster. Ferguson revealed during Tuesday evening’s pre-match press conference that he intends on giving the England international a comeback appearance tomorrow night.

Asked for an update on Smalling and fellow defender Phil Jones, who is also yet to play this campaign due to back and knee problems, Ferguson said: “Phil Jones will start training with us next Monday which is good news – he is making really good progress now. Chris Smalling is with the party and will be involved tomorrow.”

He added: “That is really good news because as we know, since the start of the season, we’ve been operating on the borderline in terms of certain defenders having to play all the time, and also having to play (midfielder) Michael Carrick as a centre-back.

“They can only help us with that – those two are outstanding young defenders and it will give us a fantastic squad to take on all our challenges.”

Darren Fletcher and Paul Scholes also joined the list of players not travelling to Portugal for the game. Fletcher has picked up a cold, and Scholes, who is 38 this month, is being rested. Ferguson plans to freshen up the “old man” before throwing him into any big games.

2 responses to “Smalling in line for United return”