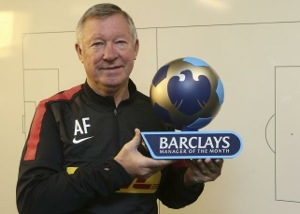 On this day in 1986, Sir Alex Ferguson was appointed Manchester United manager. In addition to celebrations, the Scot was named manager of the month after helping the Reds surpass Chelsea on top of the league table.

In October, United beat Newcastle 3-0, Stoke 4-2 and Chelsea 3-2, (as well as winning both games in the Champions League). The only downfall was suffering a defeat to Chelsea in the Capital One Cup when we would have faced Leeds in the next round.

“We’ve got a great set up here, I’ve got great staff and the players of course, they are the reason I’m getting this award there is no question about that so I am very pleased,” said Ferguson.

Since the Premier League began, Ferguson has been named manager of the month 27 times. More importantly, I’m sure he’s much more interested in winning Manchester United’s 20th league title this year. Chelsea and City, however, will have something to say about that.