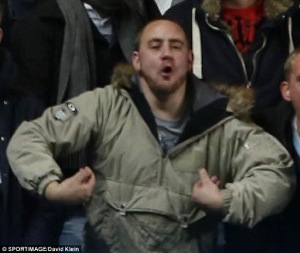 The Metropolitan Police have arrested a man over an allegation that a racist gesture was made towards Danny Welbeck at Stamford Bridge last Wednesday. Chelsea released a statement after the picture went viral promising to take the “strongest possible action” which they have done to some extent.

Police arrested the 28-year-old after footage went viral showing him mimicking a monkey gesture at Welbeck. Along with the act being totally inappropriate, it happened three days after Chelsea accused Mark Clattenburg of racially abusing John Obi Mikel. That investigation is still taking place and for the second week in a row, he won’t be refereeing any games this weekend.

A Scotland Yard spokesman confirmed: A man has been “arrested on suspicion of a racially aggravated offence”. The man was later released on bail until 29 November. It follows a separate allegation last month in which Chelsea accused a match official of using “inappropriate language” towards Mikel.

It’s hard to believe we’re currently in 2012 and still have to put up with this inappropriate behaviour. Last season Luis Suarez and John Terry made the headlines because of acts with similar taste. A Liverpool fan was also arrested for mimicking the same monkey gesture at Patrice Evra. When are these people going to get with the times are realise racism is wrong?