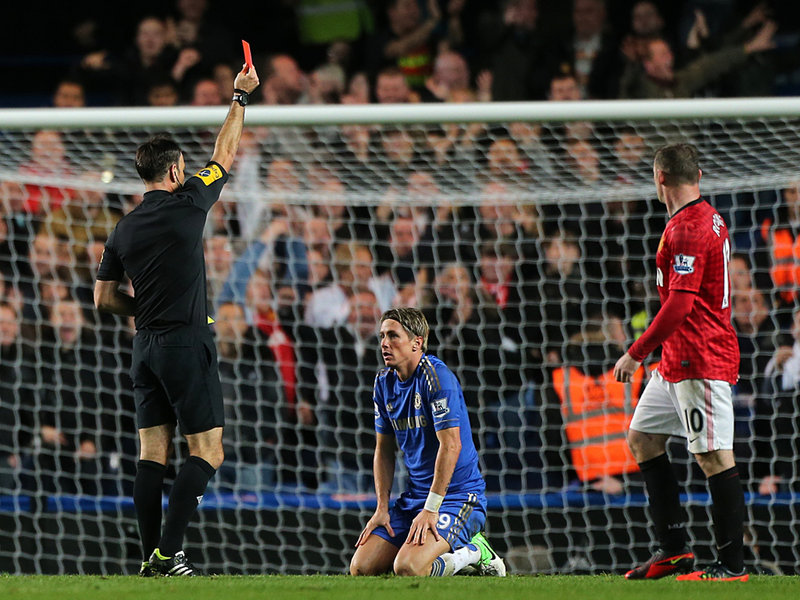 There is a spilt opinion on the argument regarding Fernando Torres’ red card today at Stamford Bridge. After colliding with Jonny Evans he exaggeratedly fell to the ground in attempt to get the Northern Ireland international punished. That backfired and lead to his second yellow card of the evening, suspending him for Chelsea’s next fixture on Wednesday night.

Is this a method referees plan to introduce in attempt to kick cheating out of the game? Everybody knows diving consists of exaggeration and I think that’s how Mark Clattenburg sees it. Either way his sending off means means very little to this. Torres should have been sent off in the first half.

Fernando Torres collided viciously with Tom Cleverley earlier on in the game with a chest high lunge. Republik of Mancunia has compared the tackle to Nigel de Jong’s on Xabi Alonso. It was one of many controversial decisions that came from today’s main fixture. Cleverley, who rolled around in a similar fashion to Torres before getting sent off, was lucky to walk away without an injury.

Some days you get decisions, other days you don’t. It’s always been that way so I don’t understand the pathetic conspiracy stance that comes mainly from Liverpool supporters. I await messages to pop up on RAWK tomorrow morning with complaints towards Sir Alex Ferguson or David Gill being the reason behind their stoppage time winner getting called offside. Offended by everything, ashamed of nothing.

4 responses to “Should Torres have been sent off?”