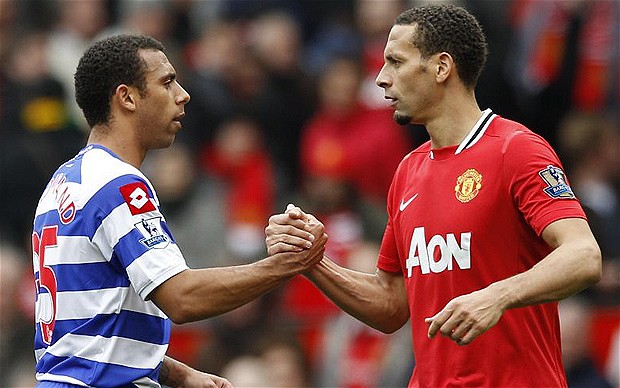 Rio and Anton Ferdinand have criticised the FA for not throwing the book at racism, arguing “deep divisions” have been exposed.

The brothers insist that they support the campaign, and will continue to do so. But their protest was intended to spur the campaign into more meaningful action against racism in football.

It has been a year since the incident at Loftus Road. During that time, some of the deep divisions that exist in football have been exposed. In the coming months there will be ongoing discussions, we are sure, on finding a way forward. We intend to participate in these discussions, along with numerous other current and ex-professionals of all races, from the grass roots upwards, across the football community as a whole.

On the issue of Kick It Out, we would like to go on record to say what fantastic work they have done in the past regarding education and awareness. However, times change and organisations need to change with them. We are more than happy to join the discussion, privately, to make Kick It Out more relevant in its fight to stamp out racism in football.

Although we have been left disappointed by the PFA and the FA’s actions over the last year, as a family, we are committed to working with football’s existing organisations towards the betterment of the game and to achieve immediate action.

We would like to thank all the fans and the staff at Queens Park Rangers and Manchester United for their support in what has been a difficult year. In particular we want to thank Sir Alex Ferguson and Mark Hughes.

We will not be discussing publicly any issues connected with the case. We are now going to concentrate on playing football.

In swift response the Kick It Out campaign issued a statement to declare that they welcome the words issued by the Ferdinand brothers, who both refused to wear the KIO t-shirts last weekend.

The brief statement read: “Kick It Out very much welcomes this statement. We know and recognise the hurt that many people have gone through over the last 12 months, none more so than the Ferdinand family themselves.

“We will continue to work across the campaigning and diversity agenda with all partners to ensure the grievances of players are concluded fairly, thoroughly and swiftly.”