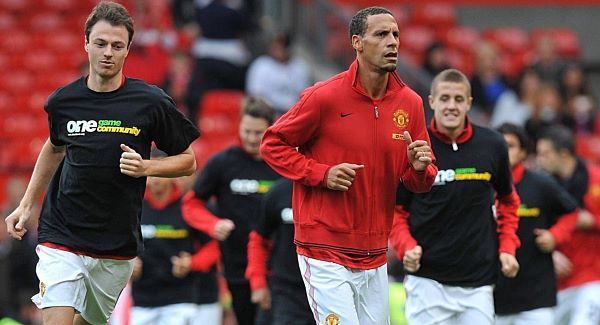 On Friday morning, Sir Alex Ferguson assured the world that every Manchester United player—including Rio Ferdinand—would be wearing the Kick It Out T-shirt during warm-ups ahead of the Stoke City fixture.

On Saturday afternoon, every player EXCEPT Rio Ferdinand wore the anti-racism shirts—which of course didn’t sit too well with the Boss. He was ready to roast Rio for publicly embarrassing him.

By Monday morning, Fergie and Ferdinand were friends again.

No doubt on Sunday, Rio explained that his decision not to wear the T-shirt was due to disappointment–not defiance. Disappointment with the way the Kick It Out organization was addressing racism in football.

After all, the Kick It Out campaign started back in 1993. After 24 years, what has it achieved?

Liverpool even supported Suarez in blaming the victim. Meanwhile, John Terry tried to dismiss his abuse of Anton Ferdinand as simply “banter”. Fifa president, Sepp Blatter, is so out-of-touch on the issue that he completely denied racism was a problem on pitches. His advice? Players who are racially ‘insulted’ should just “shake hands” with their opponent at the end of the match.

Based on recent events, I certainly can’t blame Rio for being disillusioned, disheartened and disappointed with Kick It Out’s ability to effect change on eliminating racism. I am too.

If Sir Alex wants to better understand Rio’s stance, maybe he should pick up a copy of the Kick It Out’s 2010-11 Annual Review.  Will he be as shocked as I was to learn that Kick It Out operates on a paltry annual budget of £453,913 which has to cover wages, office overhead in addition to promoting an expanding range of discrimination issues?

Lord Herman Ouseley, the chair of Kick It Out, wrote in the 2010-11 Annual Review: “In particular, during the last year, attention has been focused around concerns with homophobia, anti-Semitism, Islamaphobia, sexism and abuse of disabled people.”

That’s a lot of messages to communicate to 62.6 million U.K. residents. And Kick It Out is doing that on an annual budget of less than £500,000. (That works out to be about two weeks of Wayne Rooney’s salary.)

To put those pounds in perspective, consider that in 2011 alone, the National Health Service spent:

Five years ago, the UK’s anti-smoking “Hook” campaign, which ran for only five weeks, cost around £7 million.

And according to Reuters, Adidas paid £100 million to sponsor the Olympics and pay for associated marketing (Take the Stage campaign).

It’s not surprising the Kick It Out campaign isn’t making much headway. The good intentions are there. But the pounds don’t add up.

The Kick it Out campaign isn’t as effective as it could be. It’s time to kick it upstairs—to the men in suits. If they’re as serious as they claim to be about kicking racism out of football, they need to put their money where their mouth is.

Surely the Premier League, the Professional Footballers Association, the FA and corporate sponsors like Nike and Chevrolet can afford to pay more than lip service and £450,000 per year to combat racism.

4 responses to “Ferdinand rightly disappointed with Kick It Out anti-racism campaign?”