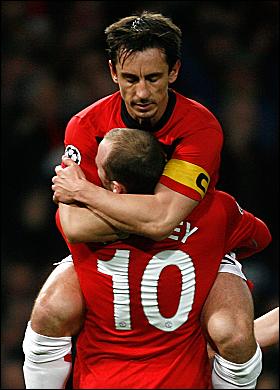 Since his return from injury this season, Wayne Rooney has been in tremendous form. His partnership with Robin van Persie has also kicked off, assisting the Dutch international on a number of occasions.

Rooney had already received a huge amount of criticism after a sluggish performance during Manchester United’s defeat at Everton on the opening weekend of the 2012/13 Premier League season. His attitude was all over the place and he didn’t look fit. When you’re the highest payed player at the club you should be able to stay away from the pies over the summer. It’s really not a big ask when you’re being paid over £200,000 per week.

However, the 26-year-old has played in a much deeper position since returning and has looked ever so comfortable doing so. Gary Neville believes we will see more of that in the coming years as Rooney becomes more mature and disciplined.

“Rooney is best when he plays like the street kid; fights for every ball, loves playing football, wants to take every free-kick, every throw-in, tackles, heads, fights like he has the passion to win,” Neville said. “The last couple of weeks, coming back from injury, I’ve seen a lean, fit, hungry Rooney. He looks like he is up for the next challenge in his career.”

The fans have seen good times and bad times with Rooney. Hopefully maturity is another factor he works on. Neville suggests the best may be just around the corner: “At the age of 26 you always have to think there’s more to come. You can’t get to the age of 26 and think ‘My best years have gone’. He has to challenge himself.”